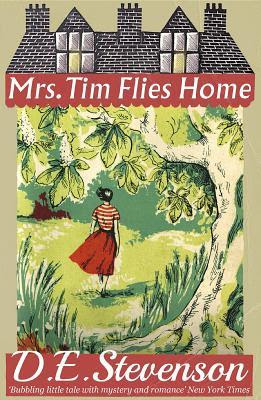 My D.E. Stevenson online fan group will be reading and discussing "Mrs. Tim Flies Home" together shortly, and I got a head start on the book.  :)  We've been reading all the "Mrs. Tim" books over the past two years, alternating them with other World War 2-era DES books for variety.

"Mrs. Tim Flies Home" is the fourth and final book in the "Mrs. Tim" series, which began with "Mrs. Tim of the Regiment" (pre-war), followed by "Mrs. Tim Carries On" (set during the war) and "Mrs. Tim Gets a Job" (the immediate post-war era).

This book was first published in 1952, and was recently reissued in a new edition for the first time in many years. Like the others, it takes the form of a diary kept by Hester (Mrs. Tim) Christie, while her husband (Major Tim Christie of the British Army) is posted abroad.  Hester and Tim have been living in Kenya for the past 18 months, but Hester is longing to see their children, Bryan and Betty (now teenagers/young adults, attending boarding school & college back in England), and arranges to rent a house in the village of Old Quinings for the summer.

Part of the fun of reading DES's books is how characters & settings from one book tend to pop up in another.  Old Quinings was the setting of our group's previous read, "Kate Hardy", and several characters from that book are present in this one too (plus there's a cameo appearance by Mr. Grace of "The Four Graces").  Several other characters we've come to know from previous Mrs. Tim books make an appearance -- including (surprise!)(NOT!)  Hester and Tim's friend Tony Morley (now a general).  That Tony carries a torch for Hester has been obvious to readers all through last three books (but not, however, to the completely oblivious Hester). Early in this volume, Tony meets up with Hester while she's on a stopover in Rome, which winds up becoming the subject of local gossip in Old Quinings -- and a potential wedge in Hester's marriage.

This book very much reflects its time and setting.  Like most of DES's books, there's not a whole lot going on in the way of plot, but the writing is warm and wonderful, with memorable characters & witty dialogue. It's a pleasant way to spend a few hours (preferably with a cup of tea in hand).  :)  Some early passages where Hester describes life in Kenya are pretty cringeworthy from a modern, post-colonial perspective, but didn't detract from my overall enjoyment of the book.

Three stars on Goodreads (it would have been 3.5, if half-stars were possible!).

(Our next group read once this one is completed will be my personal DES favourite, "The Baker's Daughter." :)  )