I finished four books during the 11 days I was visiting my parents (and started a fifth!).  Here are some thoughts about each of them, in the order that I read them. 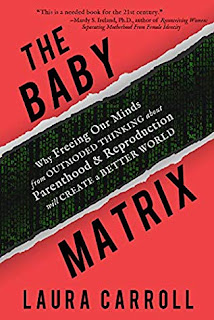 I had been meaning to read "The Baby Matrix" by Laura Carroll for some time now. It's been highly recommended by, among others, Jody Day of Gateway Women & Sue Fagalde Lick of Childless by Marriage, who reviewed it here.

"The Baby Matrix" is all about pronatalism -- the pervasive belief that everyone should have children, and that parenthood is a necessary step on the road to becoming an adult, as well as the ultimate way to lead a fulfilling life. Carroll believes pronatalism is NOT a good thing, and the book explains why, taking some commonly held pronatalist assumptions, debunking them and offering alternative ways of thinking.

Like so many other forms of privilege, pronatalism is something that many (most?) people simply don't see because they are so thoroughly immersed in it.  Often, it's only when you find yourself outside the majority, or what's considered the "norm" ( = infertile, childless, grieving a lost pregnancy, or childfree by choice) that you see it and understand just how pervasive it is.  Carroll is childfree by choice and approaches the subject from this perspective, but there is plenty in her analysis that will be familiar to those of us who are involuntarily childless.

I'm not sure I agree with everything Carroll has to say here.  For example, she believes it should become the norm for couples to adopt as a first choice in family building, instead of having biological children.  As many of us who have tried to adopt or even just investigated the subject of adoption know, there aren't as many children out there available for adoption as some people would like to think...  Should parenting education be mandatory? -- I don't disagree that parenting education would be a good thing, but I think making it mandatory and trying to enforce that would be easier said than done...!

Overall, though, I think Carroll's central argument -- that our thinking around parenthood & reproduction is outmoded and in dire need of an overhaul -- is valid and well presented. Whether or not you agree with some or all of what she has to say -- and whether or not you're a parent (or hoping to be one someday) -- this book deserves a read and some consideration.  It's thought-provoking and eye-opening, as well as thoroughly researched. 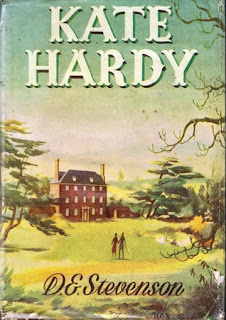 My D.E. Stevenson online group recently began reading and discussing "Kate Hardy" together.  Unfortunately, "Kate Hardy" is one of many DES novels that are currently out of print, but I was able to find a used copy online at a semi-reasonable price.

First published in 1947, and set in that same post-war time period, the title character is a successful author from London, who impulsively purchases "the Dower House" in the village of Old Quinings from local landowner Richard Morven and moves in, hoping to find some peace and quiet to write in. Morven -- separated from his wife -- is an obvious potential love interest -- but then there's also local war hero Walter Stack, recently returned home and trying to readjust to his modest working-class life as a carpenter. Class, social mobility and post-war social upheaval are major themes here, and while some of the attitudes might seem horribly outdated to our modern way of thinking, these were very real issues being confronted in Britain at the time.

Like most of Stevenson's work, "Kate Hardy" is a fast & pleasant read. The one thing I didn't especially like about it was a subplot with a bit of a supernatural/occult element to it. It was kind of jarring and nasty and felt a bit out of place in the gentle world of DES. I think the story could have done without it. 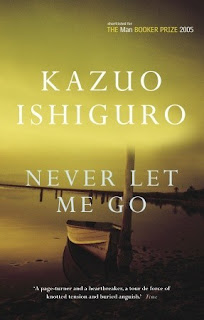 I first read "Never Let Me Go" by Kazuo Ishiguro 10 (!) years ago for Stirrup Queen Mel's Barren B*tches Book Tour. I picked it up again because it's the next selection for my upcoming library book club meeting (which will be the first meeting I've been able to attend since June!), and I'm looking forward to discussing it there.

It's hard to write about this one without giving away key plot points. (Be forewarned if you click over:  my BBBT post about the book -- which discusses it from an ALI viewpoint -- is full of spoilers.) Suffice to say it's about the students at a British boarding school called Hailsham -- in particular, our narrator, Kathy, and her friends Ruth and Tommy -- and what happens to them after they grow up and leave school. Hailsham seems like an ordinary place and the students like ordinary kids.

I didn't break down in sobs at the end, as I did the first time I read it, but I did still get tears stinging my eyes. It's pretty powerful, and there's a lot here to chew on.

There's a movie version of the book (released in 2010), with Carey Mulligan as Kathy, Keira Knightley as Ruth and Andrew Garfield as Tommy, but I haven't seen it yet -- have you? 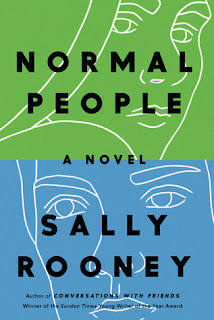 I picked up "Normal People" by Sally Rooney earlier this year, after reading rave reviews online and hearing lots of buzz about it. (Rooney is just 28!! years old!)  "Normal People" is both a romance and coming of age story that chronicles the on-again-off-again relationship between two bright Irish teenagers -- rich but social outcast Marianne and poor but popular Connell (whose mother cleans Marianne's mother's house). Their furtive romance begins when they're both students at the same high school, and continues over a period of several years when they both attend Trinity College in Dublin.

I'll admit this book wasn't quite as knock-my-socks off good as I expected it to be. I didn't feel like I could give it a five-star rating. It was difficult/frustrating for me to watch/read about Connell & Marianne hurting each other over & over again. They keep pushing each other apart, when they so obviously really do love each other. It gets a bit monotonous after a while, in that respect.

But it was still a very good read -- beautifully written, with exquisitely drawn characters that you care about. I could relate to the pair's desire to keep their relationship private, and I loved the ending. I understand the BBC is filming a 12-part television adaptation, due in 2020. It will also be shown on Hulu -- which we don't get here in Canada :( but hopefully it will be shown here too, eventually!