"Mrs. Tim of the Regiment" by D.E. Stevenson 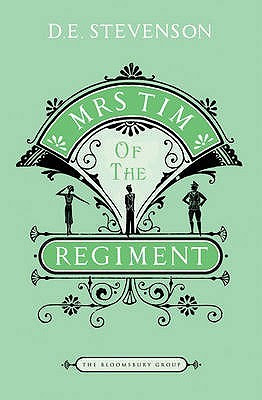 "Mrs. Tim of the Regiment" (also known as "Mrs. Tim Christie") is one of D.E. Stevenson's earliest works, first published in 1932. It's the first in a series of four "Mrs. Tim" novels, and the current book under discussion by my online Stevenson fan group.

As Stevenson explains in an introduction to the 1973 reissue, the book is based on her own diaries and experiences as a young officer's wife with two young children. Nothing hugely consequential happens in "Mrs. Tim" (or most of Stevenson's novels, for that matter), but it's a charming read nevertheless.

Mrs. Tim Christie (whose name is Hester) receives a diary as a Christmas present from her brother Richard, and uses it to detail the minutae of life as a military spouse over a six-month period. She visits the other officers' families, hosts semi-disastrous dinner parties, struggles with managing the servants, is exhausted by the antics of her two lively children, spends a weekend at a stately manor house (a la Downton Abbey), goes house hunting when her husband is transferred to Scotland, and vacations in the Scottish Highlands with her neighbour (among other activities).

Some of the members of my group have confessed they dislike books in diary format. I've always loved reading other people's diaries, whether real or fictional, and for the most part, I enjoyed "Mrs. Tim." I did struggle a bit with some of the military jargon and British-isms (and dated ones at that). For example, in one section (a weekend at a manor house), one of the guests suggests to Hester and Tim that they should "beat up Tony" -- i.e., go find Tony. That gave me pause...! (Later in the same diary entry, spotting one of the female guests coming downstairs late at night with a man who is not her husband, Tim comments that if he were the husband, he would "give his wife a good beating." – that REALLY gave me pause, even if she WAS being unfaithful and even if Tim meant it in a (sort of?) joking way…!)

I also struggled with Hester's privileged lifestyle. Group members have defended her, pointing out that she's frequently overwhelmed in her diary -- wrangling with the servants, running the household (without the convenience of modern appliances, etc.), managing the children, entertaining and visiting the "married families" of her husband's underlings, etc. And yes, today, we do have the advantage of more modern conveniences, and life for most of us is not quite so formal. And I know a lot of modern military wives find it difficult to get and keep a job because employers know they will likely not be around for too long.

Still, the vast majority of women today have to do most of the things Hester did (albeit perhaps in a slightly different way), plus the work once done by the servants (which, in Hester's case, included a cook, governess, maid & husband's "batman"). Plus deal with children every day (very few modern children, at least in North America, head off to boarding school for months at a time, as Hester's son does) -- plus hold down a job to help contribute income to the family.  I know it was a different time (and part of the charm & fascination of DES's books is the glimpse they give us of a very different past & a very different culture from modern North America) -- so much depends on what we're used to and what's considered "normal" in our communities -- but I will admit I find it hard to feel too terribly sorry for Hester and her domestic and social dilemmas. I can relate to her emotions (human nature does not change), but the circumstances that provoke them -- not always so much.

Whatever shortcomings the book has, it's redeemed by the wonderful (as usual) writing, wry humour and rich, detailed portrait of a military wife's life in 1930s Britain. I gave it three stars on Goodreads, & would have given it 3.5, if I could figure out how to assign a half-star...! ;)

Many of Stevenson's books are out of print, but I was able to find a recent (2010) reissue of this title at a very reasonable price via Amazon. The other three Mrs. Tim books, however, are long out of print and fairly expensive on the resale market, but there is a rumour afoot that they may soon be reissued too. Fingers crossed!  (The next volume in the series, "Mrs. Tim Carries On," published in 1941, follows the further adventures of Hester, Tim and family during the Second World War, which I would love to read.)