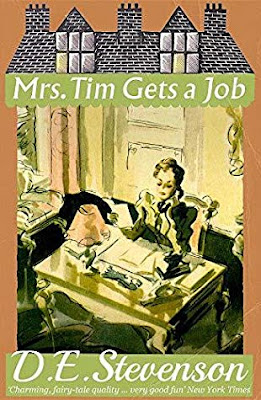 Over the past year, my D.E. Stevenson online fan/reading group has been making its way through the author's four popular, semi-autobiographical "Mrs. Tim" books, interspersing them with other books by the author (to give people a break from Mrs. Tim and the diary format, which some group members enjoy and others don't). So far, we've read "Mrs. Tim of the Regiment" (first published in 1932), in which we were introduced to Mrs. Tim (Hester) Christie, her British army officer husband Tim, their two young children Bryan & Betty, and other friends;  and "Mrs. Tim Carries On," first published in 1941, which brings Hester & family into 1940 and the Second World War.

The third volume in the series, "Mrs. Tim Gets a Job," was first published in 1947. The war is over, but Tim is still in Egypt. Bryan and Betty are both off at boarding school, and the lease on the family's home is being terminated by the landlord. Where will Hester go and what will she do?  Fate intervenes in the form of a job offer, helping the prickly Miss Erica Clutterbuck -- a friend of Hester's friend Grace -- run a small hotel out of her ancestral home in Scotland.

Like most of DES's novels, this is a "comfort read" -- short on plot and long on characterization, humour and wonderful descriptions. I enjoyed catching up with Hester and seeing her in this new setting, facing new challenges. Erica Clutterbuck (what a name!) is a wonderful character whose bark turns out to be worse than her bite. And Tony Morley (now a Brigadier, and still obviously carrying a torch for Hester) drops by for an unexpected brief visit.

We're also privy to Hester's thoughts and some interesting discussions on a number of different subjects. For example, Hester finds herself debating the American vs British definition of happiness with an American hotel guest (which several Goodreads reviewers have commented on -- is happiness a right or a privilege?).

Hester -- who was initially ambivalent about taking on a job and doubtful of her qualifications -- unleashes a surprisingly spirited feminist (for the day) rant directed at Tony, who voices his strong disapproval of her job:


"I don't like it at all!"  exclaims Tony suddenly.

"Nonsense," he says. "There is no need for it. Tim said I was to make you chuck it."

"It's most unsuitable," says Tony, looking down his nose.

"You're old-fashioned, that's what's the matter with you. You're the sort of man who likes a woman to sit with her lily-white hands folded in her lap -- or embroidering a tapestry -- while her lord and master rides out to do battle in her honour."

Tony says he didn't know he was that sort of man.

"Well, you are!" I cry in annoyance. "You would have liked to find me at Winfield, dropping tears over my needle-work -- you know you would!"

"Tears," I repeat angrily. "Tears and idleness and lily-white hands. What sort of life is that for an active woman?"

Tony says it sounds a trifle dull, but --

"Of course it's dull -- dull as dishwater!  Isn't it a hundred times better to do something useful? How would you like to have nothing to do, day after day, except cook and dust the drawing room?"

(A small point of order:  Hester, like many women of her time & class, actually had household help to do the cooking & dusting for her -- but you get the idea, lol.)

Tony attends church with Hester and gets into a deep conversation with the minister afterwards about Eastern religions and Taoism in particular. Hester comments on Tony's ability to talk to all sorts of people about all sorts of things. I enjoyed this exchange between them:

"You give a bit of yourself and receive a bit of the other fellow, and you're both richer... That's one reason why it's worthwhile to be alive," continues Tony. "It's a sort of immortality we can all achieve."

"It's easy," declares Tony. "If we go about the world giving bits of ourselves to people we meet... it's worthwhile having lived... we leave something behind us which goes on -- and on."

Interestingly for me, Erica Clutterbuck claims she doesn't like children (although she winds up getting along famously with Hester's daughter Betty):

"No," says Erica firmly. "I can't bear the little darlings. They bore me stiff. You may think this very unnatural -- I can see you do -- but it isn't as unnatural as you might suppose, nor so common. A great many people don't like children, but few have the courage to say so...."

This seems pretty daring for the mid-1940s (let alone our own times!), doesn't it?

Unfortunately, I felt the book sort of petered out toward the end, with a brief and somewhat unsatisfying visit from Bryan and a rather abrupt conclusion that had me thinking, "That's it??"  This probably knocked a few points off my Goodreads rating.  Three stars.  Nevertheless, it was an enjoyable read from one of my favourite authors.

The fourth and final book in the Mrs. Tim series is "Mrs. Tim Flies Home," from 1952,  Before our group reads that, however, we'll be tackling "Kate Hardy" (1947) -- both books share the post-war setting of "Old Quinings." Unfortunately, this one hasn't been recently reissued, but I managed to obtain a (rather yellowed) used paperback online at a semi-decent price, and look forward to taking part in the discussions about that book this fall.