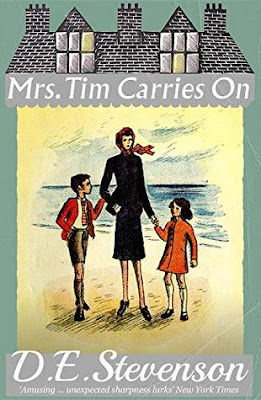 January 7th was a great day, if you're a fan of mid-20th century British author D.E. Stevenson (as I am). This was the day that Dean Street Press and Furrowed Middlebrow issued new editions (in both paperback and e-book formats) of five Stevenson novels which have long been out of print and difficult/expensive to find on the resale market -- complete with a wonderful new introduction by author Alexander McCall Smith, who beautifully summarizes the lasting appeal of Stevenson's work (you can read the introduction & the first few pages here on Amazon -- click on the cover where it says "Look Inside").

Three of the new releases are sequels to "Mrs. Tim of the Regiment," which my D.E. Stevenson online fan group explored together last year (my review here).  So it was natural that we chose the next Mrs. Tim book in the series, "Mrs. Tim Carries On," as our next group read as soon as it became more widely available.

"Mrs. Tim Carries On," like the original "Mrs. Tim," continues the diary of Hester (Mrs. Tim) Christie, an army officer's wife in 1930s/40s Britain. The book/diary chronicles the adventures of Hester, her two lively children, Bryan & Betty, and their friends in the military community of Donford while Major Tim and his batallion are in Europe fighting the Nazis.  The book/diary covers the year 1940, early in the Second World War, and was published in 1941 -- meaning that (like "The English Air," our group's previous read), it was written and published while the war was still going on, without the benefit of hindsight/knowing what the outcome would be.

Hester vows that she is not going to write about the war in her diary:


There is so much War News in News Bulletins, in Newspapers, and so much talk about the war that I do not intend to write about it in my diary. Indeed my diary is a sort of escape from the war . . . though it is almost impossible to escape from the anxieties which it brings.

But of course, the shadow of the war looms large in Hester's life and in this book. Hester and her friends (including several we met in the first "Mrs. Tim" book) "keep calm & carry on" in the absence of their men with stiff-upper-lip British resolve (and no doubt this book provided readers of the time with a welcome escape from their own war-related worries). She organizes "comforts" for the batallion, takes shelter during air raids, and entertains a young house guest (among other adventures).

And then comes Dunkirk -- and Tim goes missing.

(Never fear -- this IS D.E. Stevenson, and a happy ending of some sort is practically guaranteed. ;)  )

From our modern perspective, this book (like "Mrs. Tim Christie" before it) is quite dated in some respects. There are some male comments about educated/smart women (not complimentary ones, either!) that are jaw-dropping from a modern perspective... and I could cheerfully strangle Hester's annoying friend Grace, who gives birth to twin boys (of course!) and basks smugly in the attention following their birth. When Hester arrives to visit, a week after the boys are born, Grace is (still) lounging in bed with a nurse tending to the babies (and whisking them away after Hester admires them):


Grace looks comfortable and happy. I am not surprised at her air of well-being, for, on looking back at my own experience, it seems to me that the happiest and most comfortable times in my own life were after my own babies arrived. One feels one has done a good job of work to the best of one's ability, and one glories in the rest and the attention and in all the kindness and consideration. There one lies, a luxurious prisoner, in an atmosphere of cosy comfort which nothing is allowed to disturb.

I know this is the distance of both time & class talking here... but it still rubs me, as a childless woman, the wrong way. And I'm sure that most modern middle-class mothers wouldn't relate much to this passage either. Who among you mothers out there, one week post-birth, found yourself  "glorying in the REST??... which nothing is allowed to disturb"??

But even with stuff like this (!), overall, I didn't find this book quite as annoying as the original. It's a a fascinating glimpse of the home front... and, like most of Stevenson's books, a pleasant diversion from the worries of our own modern world. I zipped through it in a couple of days. (Which is a good thing, since I will be leading part of the group discussion in less than two weeks.)