"The Alice Network" by Kate Quinn 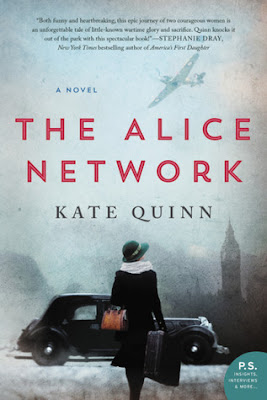 "The Alice Network" by Kate Quinn has been in my TBR pile for a while now. The premise (female spies in World War I ) sounded intriguing, it was a "Heather's Pick" (personally endorsed by the CEO) at our national mega-bookstore chain (also a featured pick from actress Reese Witherspoon's book club), and it was on sale, lol. It also happens to be this month's pick for one of the local library book clubs I'm hoping to join, and so I picked it up about a week ago and started to read.

The book actually interweaves the stories of two different women from two different eras:  Evelyn (Eve) Gardiner, who is recruited to become a spy in 1915 wartime France, and Charlotte "Charlie" St. Clair, in 1947, a wealthy American college girl who is pregnant, unmarried and desperately searching for her beloved cousin Rose, who disappeared in France during the Nazi occupation. The structure goes back & forth between the two women's story lines. Both are interesting, but Eve's is by far the more compelling. I've heard of Mata Hari, of course, and the book reminded me of Edith Cavell  (there's a mountain named after her in Jasper National Park in Alberta), but I had no idea that so many women were involved in intelligence work in the First World War. Moreover, there's an author's note and appendix at the end that make it surprisingly clear just how much of this book was based in actual historic fact and on actual people.

It's a novel by a woman, about women (strong female, even feminist, characters, at that) -- and yes, there is romance -- but it's far from chick lit. ALI caveat:  the book includes several unplanned pregnancies, abortion, infertility (of a peripheral character -- who later has a baby, of course!), and the death of a baby/child (as recounted by an observer).  The brutality of the German/Nazi regimes during both wars -- including torture and mass murder -- is made abundantly clear.

But is it worth reading? Absolutely. Perhaps it's a bit long (almost 500 pages) -- but the subject matter is really interesting, and it kept me turning the pages, especially towards the end. I gave it four stars on Goodreads. (And note to Hollywood: I think this would make a really great movie or mini-series for TV.)