"So Close to Being the Sh*t, Y’all Don’t Even Know" by Retta 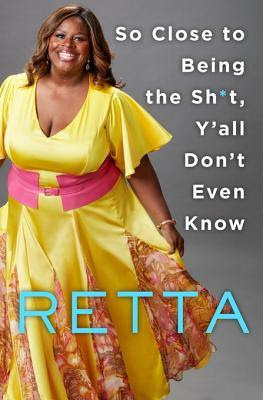 Confession: I've never watched an episode of "Parks & Rec" on TV (although I've certainly heard of it). So I didn't have a clue who Retta was when "So Close to Being the Sh*t, Y’all Don’t Even Know" was chosen for the next read in our Gateway Women online book club (criteria:  no children or pregnancies as major plot points, and definitely no miracle pregnancies).

Sometimes your book club chooses a book you would never have picked up otherwise -- and you're pleasantly surprised or even wowed by the introduction to a great new author. Of course, sometimes, you and the chosen book just don't click. ("The Three Weissmans of Westport," I'm looking at you....)

Despite my lack of previous knowledge of Retta &/or "Parks & Rec," this was, happily, a book I enjoyed. Retta (real name: Marietta Sirleaf) grew up in New Jersey, the child of immigrant parents from Liberia, and attended Duke University, with the goal of attending medical school. She never did write that MCAT exam (although she says it's still an option...!): she started doing standup comedy while still a student, won a Comedy Central competition and wound up moving to Hollywood with dreams of starring in her own self-titled sitcom.

That hasn't happened (...yet!), but she did land a co-starring gig on "Parks & Rec," which lasted seven seasons, as well as other TV & movie work. Besides dishing on her Parks & Rec co-stars, she has some hilarious tales to tell that involve Robert Redford, Robert Pattinson, Jon Hamm and Michael Fassbender, among others. Not to mention confessing her addictions to coffee, designer handbags, social media, "Hamilton," and LA Kings hockey (!).

This was a fun, light, easy read (and not a baby in sight. The closest it came to mentioning children were Retta's bewilderment over being called "Mom" on social media -- supposedly a compliment, but she says it made her feel old. And, when talking about her efforts to eat better: "I gotta be honest, at this point I want Krispy Kreme more than I want children."). Retta's voice and personality were evident in every page, and now I want to go watch some "Parks & Rec" and see what I missed out on the first time around.  :)

3.5 stars on Goodreads, rounded up to 4. (Lisa, who runs the GW book club, recommends the audiobook version, and it would probably be great in that format!)