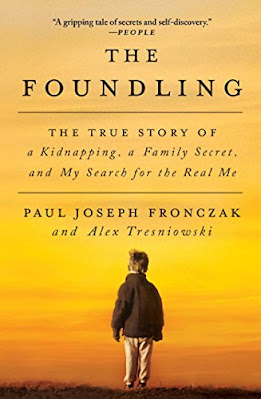 Mid-last week, I saw an ad on CNN for an upcoming documentary -- to be aired  tomorrow/Sunday night (Sept. 26th) -- called "The Lost Sons."  As I watched, I realized the storyline sounded very familiar. A while back, I'd read a story/review of a fascinating-sounding book called "The Foundling," and bought a paperback copy when I saw it in the bookstore (albeit it had been languishing in my "to be read" pile ever since then). I went to my bookshelves and pulled it out. Sure enough, same guy, same story.
I always like to read the book before I see the movie, if possible -- but I was in the middle of reading "Where the Crawdads Sing" (reviewed here), and I wanted to finish it before I started yet another book. I closed "Crawdads" yesterday/Friday morning, and picked up "The Foundling" later that afternoon. Could I get through the 347 pages in the 48+ hours or so before the documentary aired on Sunday (tomorrow) night??
I decided to give it a shot -- and fortunately, I found it to be a fast and captivating read. I finished it tonight -- about 30 hours after I opened it. :)
"The Foundling: The True Story of a Kidnapping, a Family Secret, and My Search for the Real Me" is the jaw-dropping true story of Paul Joseph Fronczak. When he was 10 years old, Paul was snooping in the crawl space of his family's Chicago home for hidden Christmas presents when he stumbled on some boxes of old letters and newspaper clippings that changed his life forever. The clippings told Paul that he'd been kidnapped (!) from the hospital on the day he was born (in April 1964) by an unidentified woman in a nurse's uniform.
Two years later, a little boy, approximately two years of age, was abandoned in a stroller in front of a department store in Newark, New Jersey.  Blood tests were inconclusive -- no DNA testing back then! -- but the heartbroken Fronczaks immediately identified the boy as their missing son, legally adopted him and took him home to Chicago. The story of Paul's abduction and abandonment two years later was never referred to, even after the boy's discovery in the crawl space. But Paul couldn't help but notice that he looked nothing like his parents or younger brother, or that he seemed to have little in common with them either.
As an adult, Paul bounced around the country from job to job and relationship to relationship. Then, in 2012, he became the father of a baby girl. Questions from the baby's doctors about his family's medical history prompted Paul to take a DNA test and begin investigating the truth of his origins:  Was he really Paul Joseph Fronczak, the kidnapped baby? If not, then who was he? And if he wasn't Paul Fronczak, what had happened to the real Paul?
This was an absolutely fascinating story, with many elements that have always intrigued me:  it's a true crime/mystery/detective story that delves into issues of genealogy and adoption, and raises interesting questions about how we define family and identity.
(Interestingly, the Fronczaks had had a stillborn son before Paul was born. Imagine being a stillbirth mother in the early 1960s, when such losses were generally brushed under the carpet, only to have your "rainbow" baby literally stolen from your arms in the hospital...!)
The story ends in late 2015 (the book was published in 2017). I've been trying to avoid finding out too many spoilers about the documentary before I watch it tomorrow night, but inevitably a few crept in... I will say that I think it reveals some developments in Paul's story that have unfolded since the book was published.
If you wind up watching the documentary, let me know what you think!
A solid 4 stars on Goodreads. If I had one criticism of this book, it would be that there's a very large cast of characters, and it was sometimes confusing to remember who was related to who and how. A family tree or "cast of characters" list might have been helpful -- although, to be fair, it also might have spoiled some of the surprises.
This was Book #48 read to date in 2021 (and Book #4 finished in September), bringing me to 133% of my 2021 Goodreads Reading Challenge goal of 36 books. I am (for the moment, anyway...!) 22 (!) books ahead of schedule. :)  You can find reviews of all my books read to date in 2021 tagged as "2021 books."
Posted by loribeth at 9:45 PM