"The House of the Deer" by D.E. Stevenson (re-read) 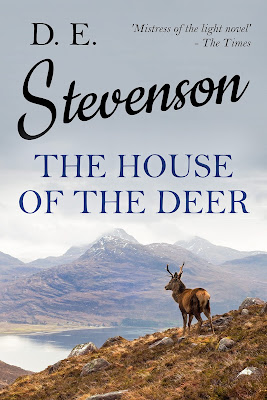 My D.E. Stevenson fan group has just finished our chapter-by-chapter reading & discussion of "The House of the Deer," the last novel Stevenson wrote and published during her lifetime (in 1970 -- she died in 1973), and a sequel to "Gerald & Elizabeth."  I read the book myself before we started going through it as a group, and reviewed it here.

"The House of the Deer" picks up not long after "Gerald & Elizabeth" left off. Gerald is now the right-hand man of his brother-in-law, Sir Walter MacCallum. There have been a series of bold payroll robberies in the Glasgow area recently, and Walter is trying to prevent his large shipbuilding company from becoming the next victim. When he receives an invitation from his old friend, MacAslan, to go deer hunting at his lodge in the Scottish highlands, he decides he must decline -- but also that Gerald (who's due for a holiday) should go in his place. Gerald doesn't know much about stalking deer, but he learns (and we learn along with him).  He also develops a friendship with MacAslan's son, Mac -- and falls head over heels in love with his daughter/Mac's sister, Phil.

As I said in my original review, this is probably one of DES's lesser novels, and not one of my favourites to date. For one thing, I'm not into hunting; for another, there are elements of the plot that seem rather clunky and far-fetched. One of our members, who has done some research on Stevenson & her books, explained to us that this book (or parts of it, anyway) originated in a Glasgow newspaper serial Stevenson wrote back in the 1930s -- which might explain why parts of it (especially near the end) read like a 1930s gangster movie, lol.

Still, it was nice to renew acquaintances with Gerald, Walter and Elizabeth, as well as MacAslan, Phil, and her friend Donny, all of whom have figured in previous DES novels. And, as always, there are some lovely descriptions of the Scottish highlands.

My original review of 2.5 stars, rounded up to 3 on Goodreads stands.

Our next DES book will be "Anna and Her Daughters," which I have not read (or if I did when I discovered DES as a teenager, I don't have any memory of it).  Our group discussion will begin on July 11th.