The world beyond my front door 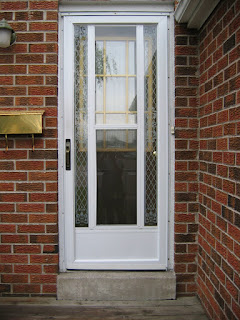 Talk about cocooning. I think dh & I could be the poster children for it. Most nights, we come home from work (perhaps stopping at the supermarket en route to pick up whatever we need for dinner that night), close the front door & don't open it again until the next morning. Especially at this time of the year, when the weather gets cold and dark.


Safe and snug inside our cozy cocoon, it's easy to shut out the rest of the world, to focus on each other, and on the good things we share in our life together.


Even if we don't have the children we once dreamed about.


One summer evening, a few years ago, we had to go out around 7:30 p.m. As we drove past several schools, we were somewhat amazed at what we saw. Streets lined with cars, spilling out of parking lots. Field after field, full of children in motion, wearing brightly covered jerseys, playing soccer or baseball. Throngs of parents standing or sitting along the sidelines, in canvas lawn chairs, clutching portable mugs of coffee and video cameras, cheering them on.


It really hit me then: there was a whole world out there that, until that point -- sheltered as we were in our cozy, childless cocoon -- we really weren't aware existed. (Dimly, perhaps, but not in a real, tangible way.) A world beyond our grasp, beyond our comprehension.


I was reminded of that day a few weeks ago, when we were on vacation. We decided to get up early (the vacation equivalent of early!) one day & take the train into the city. Normally, we head for the train around 6:30 a.m.; this day, it was two hours later. On the main road near our house, there are two high schools -- a Catholic high school to the north of us and a public high school to the south of us.


At 6:30 a.m., the sidewalks are mostly empty, aside from the occasional early morning jogger or dogwalker. At 8:30 a.m., the sidewalks were teaming with teenagers, travelling in both directions -- lugging backpacks, shivering in too-thin jackets, kilts hiked thigh-high (Catholic) and jeans slung low (public), sneaking cigarettes and trying to look cool (both)(some things never change in 30+ years….). Traffic, too, was much heavier, much to dh's amazement. Once again, we marvelled at this whole world that we were unaware of, coming to life while we were already at work in our cubicles in the city.


I had similar thoughts as I watched the excited trick or treaters outside my door on Saturday night, beaming parents bearing cameras hovering behind them. (Smile on my face. Tears occasionally stinging at my eyes.)


There's a whole world beyond my doorstep that I really know nothing about (just as they know very little about the life dh & I lead).


We might have ideas about what each other's lives are like. We can guess. We can speculate. But we don't really know.


I can watch. I can observe. I can hover around the edges. I suppose if I really wanted to, I could venture out with a friend or relative while they take their children trick or treating.


But it wouldn't be the same.


It's a world I cannot really enter, can't really take part in.


A world that briefly tantallized me, with all of its promises.