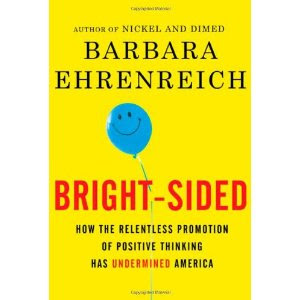 A few months ago, I blogged about seeing Barbara Ehrenreich on Jon Stewart's The Daily Show, promoting her new book, "Bright-Sided: How the Relentless Promotion of Positive Thinking Has Undermined America." I bought the book when it came out & finally got around to reading it while I was visiting my parents recently.

Ehrenreich illustrates her thesis through a series of examples, beginning with her own diagnosis of breast cancer some years ago. This is, perhaps, the part of the book that holds the most relevance -- and is of most interest -- for those of us who have dealt with infertility &/or pregnancy loss, or any kind of illness or medical condition.

She traces the history of positive thinking in American culture, and particularly its impact on American corporate culture -- moving through Dale Carnegie & Norman Vincent Peale to "The Secret" and the "prosperity gospel" preached by the likes of Joel Osteen and, finally, an examination of how an over-reliance on positive thinking may have contributed to the recent near-collapse of the global economy. There were people who recognized that their bank's subprime mortgage portfolios were crap and about to go down the toilet, but nobody wanted to spoil the party by speaking up -- and the few who did so either found their words falling on deaf ears ("lalalala....") or out of a job.

I have thought a lot about this book as I've read the headlines about the BP oil disaster in the Gulf of Mexico. Nobody seems to know how to fix the damned thing, because it appears that nobody gave serious consideration to the possibility that there might be negative consequences to their plans. Naysayers were drowned out by the chants of "drill, baby, drill." Ehrenreich isn't advocating that we all become Debbie Downers -- just that a healthy dose of skepticism and critical thinking might be in order.

As I mentioned above, some chapters were more interesting than others, & the book did drag a little in the middle. If you're not sure this book appeals to you, you might want to borrow it from the library or wait for the paperback before dropping $23 ($29.50 Canadian). Nevertheless, I found it to be a fascinating read, and an argument that made a lot of sense, for the most part.
Posted by loribeth at 8:35 PM