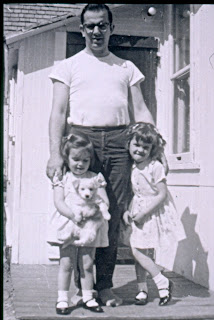 Since I shared an old photo of my mom, sister & I on Mother's Day, I thought I'd do the same for Father's Day. This photo was taken in the early/mid-1960s,when I was about 4. I'm on the right & my sister is on the left, holding our one & only puppy, Honey. (This is one of only two photos we have of her.) She proved too much of a handful (the dog -- not my sister -- although she has proved to be a handful in her own right over the years, lol) & we took her to my grandparents' farm on our next visit there -- where she was run over by a car some months later. :(

It was my first encounter with death. I remember my mother holding me as I cried & cried. She told me that Honey was in heaven. I asked if there would be lots of bones for Honey to eat there, & dogs for her to play with, and she assured me yes. That made me feel better.

My dad was typical of many dads of my generation, I think. He worked hard, long hours, to provide for our family. (He still works -- albeit part-time now -- even though he's almost 71. I don't think he'd know what to do with himself otherwise.) But he was a fun dad too -- wrestling on the living room floor with me & my sister, building tents with us out of TV trays, blankets & sofa cushions, making popcorn for us on Sunday nights to eat while we watched Ed Sullivan, taking us to the general store in our PJs to buy us Revels (chocolate-covered ice cream bars). My mother was the disciplinarian, & her rants & threats were something we were used to. My dad seldom got angry with us -- but when he did, man, was that effective.

My dad had an emotional side that I only became aware of as I grew up. I had never witnessed him crying until his own mother passed away, when I was 14. It was (& still is) the worst thing in the world for me to witness. The day after my wedding, my new husband & I were preparing to leave my parents' house to return to the city, & from there head off on our honeymoon, & then to our new life in Toronto. Saying goodbye to my parents, my dad broke down in tears. It startled me. It hadn't really hit me until that moment that I was really leaving home for good.

When our daughter -- his first and only grandchild -- was stillborn, he couldn't even speak to me on the phone. My mother flew to be with us & was there when I delivered our Katie, & helped us plan the funeral. Dad arrived a few days later, as they had originally planned for their holidays. In the interim, he played in a golf tournament that he takes part in every year. Initially, I was a little peeved -- was a golf tournament more important than his granddaughter?? On second thought, though, I realized maybe that was the best thing for him to be doing at that point.

One of the hardest things about Katie's funeral was seeing my dad standing by her niche at the cemetery, his shoulders heaving, wiping his eyes.

We're not a family that says it out loud a lot. We tend to submerge our true feelings behind layers of sarcasm & wisecracks.

The Toronto Star profiled four fathers-to-be in today's paper, talking about what kind of fathers they want to be, their hopes & plans for the future (trips already in the works to see grandparents and go to Hawaii in December, plans to celebrate both Jewish & Christian holidays, etc.). I guess it's the dead baby mama in me (still), but I couldn't help but wonder at the supreme confidence of both the fathers and the paper in running such a story.

I wish them all well and I hope all their plans come to fruition.

I left today's agenda entirely up to dh. We saw his dad last night, & visited our Katie at the cemetery (he thought it would be too sad to go there today). We thought about going to see "Toy Story 3," but kiddie movie on Father's Day (not to mention opening weekend) sounded like a recipe for disaster, so we've decided to wait a few weeks for that. We went out briefly to our favourite megabookstore but have otherwise spent the day lazing around the house. (I've even let him have the computer for awhile, lol.)

I think we both need it. We're gearing up for what may be a difficult & stressful week, (absolutely no) thanks to the G-20 meeting a few blocks away from where we work. Potential havoc may be played with our commute, particularly as the week wears on. We've been advised to carry food & water with us -- but not to drink TOO much, since most of the washrooms on board the trains may be locked for security reasons. Wonderful. :p