As I mentioned in a previous post, I didn't read quite as many books as I normally do when I'm on holidays... having The Princess around every day cut into my reading time significantly. (Not that I'm complaining, mind you, lol.) Nevertheless, I did finish off one novel, read a second, & get most of the way through a third book. 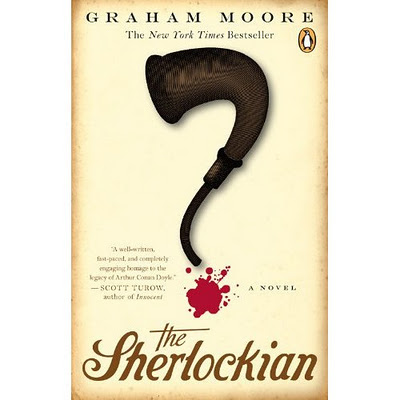 I can't remember if I saw The Sherlockian by Graham Moore in the bookstore first, or read a review about it & was intrigued. Anyway, I love mysteries, & while I will confess to never having read anything by Arthur Conan Doyle, I have seen my share of Sherlock Holmes movies & TV shows, including the classic BBC TV series from the 1980s starring Jeremy Brett, the new movies starring the charismatic duo of Robert Downey Jr. & Jude Law, and the new BBC TV series with Benedict Cumberbatch (what a great name...) and Martin Freeman as a modern-day Holmes & Watson, who use the Internet & cellphones as well as their brains to solve cases.

So I picked up "The Sherlockian" awhile back & finally got around to reading it, starting just before I went on vacation & finishing while I was still at Mom & Dad's. The plot is fiction, but based in historical fact, alternating between Arthur Conan Doyle trying to solve a mystery in the late 1890s and early 1900s, and a modern-day Sherlock Holmes buff named Harold, who gets caught up in the investigation of a murder at a Sherlock Holmes convention. The common thread is a certain volume of Conan Doyle's diary from 1900, which mysteriously went missing and remains unfound to this day (fact). The murder near the book's beginning is also loosely based in fact, which adds to the intrigue.

The book has been well received. I liked it. It wasn't the best book I read all year -- but it was fun, & I wound up learning a lot about Sherlock Holmes and his creator. (Example: Would you believe one of Conan Doyle's best friends was Bram Stoker -- the creator of another memorable fictional character, Dracula?) 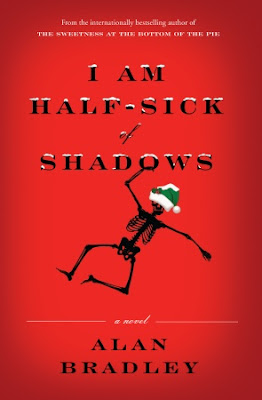 About a year ago, I picked up a novel I kept seeing on the store shelves, called The Sweetness at the Bottom of the Pie by Alan Bradley -- a murder mystery set in post-war 1950s England, and featuring a precocious 11-year-old protagonist with a penchant for poison, by the intriguing name of Flavia de Luce. Within just a few pages, I was hooked. Over the past year, I've read two more Flavia mysteries, and happily, a fourth was published just before Christmas.

Appropriately, I Am Half-Sick of Shadows is set at Christmastime. Sadly, Flavia's family has fallen on hard times -- the family silver was sent to auction in a previous book -- and Flavia's father has leased the family's crumbling mansion, Buckshaw, to a film company for a movie shoot, in a desperate attempt to stave off insolvency for awhile longer. The two stars of the movie agree to stage a benefit performance at Buckshaw. Most of the villagers attend and, conveniently, get snowed in by a blizzard. While they are trapped in the big house together, there is (of course!) a murder, and Flavia goes to work trying to untangle the mystery and identify the killer. Meanwhile, she is determined to solve an even bigger mystery: whether Father Christmas (Santa Claus) is real, and how he gets down the chimney.

I guess you can tell that I adore Flavia, & I think you might too. Each book builds on the next one, so I would recommend that you to begin with the first book, Sweetness at the Bottom of the Pie, and move to the other books from there.

The third book I began while I was on vacation was Closure by Nancy Berns, which I heard about a few weeks ago & blogged about here. I am almost finished & will have a separate review soon!