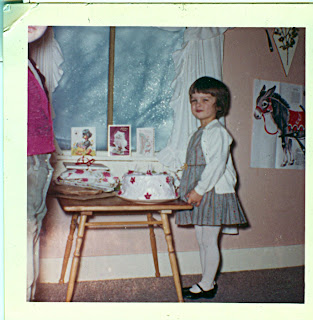 Yep, that's me. About 47 (eeeekkkk!!) years ago today, give or take a few. It was January 1965, and it was my 4th birthday party. Note the cake (confetti angel food, from a mix but made by Mom, decorated with plastic flowers -- in other years, it might be Smarties), the pin the tail on the donkey game on the wall behind me, my stylish '60s bob, Mary Jane shoes, tights & crinoline. : )

All my birthday parties as a kid were more or less the same (& so were those of my friends) -- up to a dozen friends would come to our house (decorated with balloons & streamers), we'd play a few games, have hot dogs or sloppy joes with potato chips & pickles, drink Kool-Aid, have birthday cake & then open the presents. I think we might give or get a chocolate bar to the guests as they left -- loot bags were unheard of.

I stopped having birthday parties around the time I became a teenager, instead having a handful of my closest friends over for dinner, & sometimes a movie. These days, my birthdays tend to be much quieter events. The last several years, I've usually tried to take the day off work, maybe go to the spa or shopping (or both), & then for dinner at a favourite restaurant with dh. That's more or less the plan for today. I'm thinking I might be daring & go for blue nail polish on my manicure, lol. It only took 51 years to try it...!

I look at that little girl in the picture, and it seems so long ago and like yesterday, all at once. (And I wonder if that's anything like Katie would have looked when she was 4.) 51 seems old when you write it out. :p But it's one year closer to retirement ; ) & being done with Aunt Flo's visits for good. (And, as my grandma used to say, & as I wrote last year, "consider the alternative.") All things considered... I'll take it, lol.
Posted by loribeth at 7:30 AM

Labels: birthdays, getting older, growing up