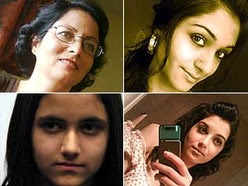 Sunday afternoon, dh & I were glued to CBC Newsworld. A verdict was imminent in the Sh.af.ia murder trial that had been playing out & making headlines in Kingston over the past several months.

I don't know how much coverage this trial has had outside of Canada. Do some Googling (remove the periods in the name) and you will find tons of coverage.

The barebones of the story is this: Father S., an immigrant from Afghanistan; his wife and their 21-year-old son, were all found guilty of murdering four women -- including not just one, not just two, but three of their teenaged daughters/sisters -- as well as an older "cousin" of the family, R.o.n.a. (top left), who immigrated to Canada to help with the seven (!) children.

A car containing the four bodies was pulled from the Rideau Canal near the locks near Kingston, Ontario, in late June 2009. The water was not deep (a mere 18 inches above the roof of the car) and the window was wide open, but there was no indication that they had tried to escape. The official cause of death was drowning, but, ominously, the three girls all had bruising on the tops of their heads.

The murders have been called "honour killings" by some. Not long after I started this blog, I wrote about a teenaged Pakistani girl from suburban Toronto named A.q.sa Pa.rv.ez, who refused to wear the hijab, stayed out with her friends, and ran away from home several times. Her brother convinced her to return home; shortly afterwards, she was found dead in her bed; her father & brother were later convicted of strangling her.

Like A., the S. daughters chafed at the restrictions placed on them by their father. When their tattletale brothers reported that the girls were changing from the hijab into revealing clothing at school and (horrors!) being seen in the company of boys, Father S. would fly into a rage. His daughters were pulled out of school for months at a time & confined to the house. At various times, the girls sought help from social services authorities, but understandably were reluctant to discuss their complaints in front of their parents when the police or child welfare officers arrived at the house to investigate. The oldest daughter, Z., age 19, got married, seeing it as the only way out of the home, but was persuaded to annul the marriage before the ink was barely dry on the license.

As with A. several years earlier, I wanted to weep when I learned about this case. As someone who lost a very much wanted daughter, the idea that a father (& mother) could just throw away the lives of three beautiful, spirited, NORMAL teenaged girls, like they were garbage, all for some twisted sense of family "honour," all because they were girls and therefore deemed disposable, made (and makes) me ill.

But I will admit that it was R.'s death that has affected me the most. The family presented her as a cousin/aunt who helped with the seven children. The truth was a little more complicated: the children's mother was actually Father S.'s second wife. R.was his first; it was a polygamous marriage. R. was infertile. Because she could not bear children, she encouraged Father S. to take another wife -- who promptly popped out seven over the following years, and enlisted R. to help raise them.

If female life is cheap in Afghanistan, you can only imagine what it's like for an infertile, childless female. After years of living essentially as a servant (which she chronicled in a diary that was entered as evidence at the trial), R. somehow screwed up the courage to request a divorce, and a little money to help her move to France and start a new life near her siblings.

Instead, she wound up in a car at the bottom of the Rideau Canal. She was 52 years old when she died -- a few years older than me.

As I have written before, hearing stories like this makes me eternally grateful to the Powers That Be that, as a woman, I happened to be born in Canada in the late 20th century (how much more fortunate can you be, really??), and into a family where I was never, ever made to feel less than or disadvantaged because I was a girl.