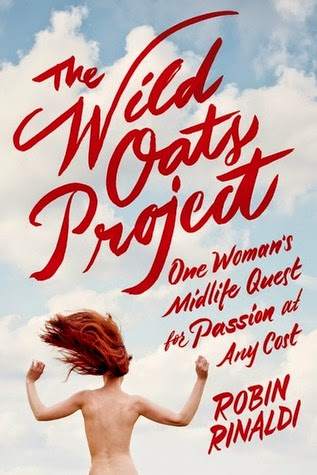 Anyone seen or heard about this new book?

Disclosure: I have not read it. (Yet?)(And perhaps I should, before I start writing about it...) But I stumbled onto it at the bookstore this past week, and the title and cover design alone were intriguing enough to catch my eye.

And then I read the inside cover flap:

The project was simple: An attractive, successful magazine journalist, Robin Rinaldi, would move into a San Francisco apartment, join a dating site, and get laid. Never mind that she already owned a beautiful flat a few blocks away, that she was forty-four, or that she was married to a man she’d been in love with for eighteen years. What followed—a year of sex, heartbreak, and unexpected revelation—is the topic of this riveting memoir, The Wild Oats Project.
An open marriage was never one of Rinaldi’s goals—her priority as she approached midlife was to start a family. But when her husband insisted on a vasectomy, she decided that she could remain married only on her own terms. If I can’t have children, she told herself, then I’m going to have lovers. [emphasis mine]

I know of many situations where couples haven't agreed on whether or when to have children. Or they started out on the same page, but when push comes to shove, one of them changed their mind. And in some cases, the marriage has ended, in full or in part as a result of this disagreement. In other cases, there has been a quid pro quo -- OK, you win, we won't have kids, BUT... I'm going to buy that two-seater sportscar I've always wanted... or, I'm going to quit my job and become a yoga instructor, etc. etc.

But I've certainly never heard of any couple striking a deal quite like this.

While I haven't read the book, I've read a few articles/reviews about it and interviews with the author. More than a few people are scratching their heads about what, if anything, not having a baby has to do with taking lovers (other than lashing out & trying to hurt the partner who denied you what you most wanted... although Rinaldi's husband agreed to the arrangement). A Washington Post review makes an interesting observation:


One of her oldest friends calls her out. “How is sleeping with a lot of guys going to make you feel better about not having kids?” she asks. Rinaldi’s answer: “Sleeping with a lot of guys is going to make me feel better on my deathbed. I’m going to feel like I lived, like I didn’t spend my life in a box. If I had kids and grandkids around my deathbed, I wouldn’t need that. Kids are proof that you’ve lived.” It’s a bleak and disheartening rationale, as though women’s lives can achieve meaning only through motherhood or sex.

In an interview with Salon, Rinaldi explains:


"I really felt like I was on this mission to find my own feminine energy... deep, fierce, primal feminine energy. The shit the patriarchy was invented to stomp on. That is what I really was searching for, and sex is a very primal and powerful way to get in touch with that... What I found is that I didn’t necessarily have to go through men to get that. I also thought a baby would be a route to that, because of course that’s such a deep, primal, feminine experience to birth and nurse and care for a baby. I found that in community with other women."

The book is about more than childlessness, of course (although the husband's vasectomy is the catalyst for what follows).  As I understand (without reading it yet), it's also about a woman exploring her sexuality (a trendy topic right now, of course -- I debated whether I should title this post "50 Shades of Childlessness," lol), a midlife crisis (women have them too), a marriage. But of course, it's the childless theme that caught my attention.

In some ways, this is a familiar story for those of us who find ourselves living without the children we wanted. When we realize that children aren't going to be in the cards (for whatever reasons), we look for other ways to find meaning and purpose in our lives, to leave our mark on this world (i.e., proof that we've lived). We think about whether we want to change our lives and, if so, how.  Knowing that we're not going to have children, not going to be living a traditional family life, gives some of us the courage to lead an unconventional life in other ways too.

Rinaldi's way of coming to terms with her childlessness is perhaps a little more "unconventional" than some. (Most??) It may not be my way, or yours. But it doesn't have to be -- we all take different paths to finding what Tracey Cleantis calls "our next happy." And Rinaldi does seem to be in a good place in her life now.

We've really only just begun to talk about living without children (by choice or otherwise), and what that means to women, to couples, to families, and to society. We're fumbling our way in the dark, finding what works, sometimes through trial and error, sometimes shocking others (and even ourselves) as we buck the status quo.  Hopefully, future generations of women will be able to benefit from our stories and what we've learned.

I do wonder about what people who have never had to face unwanted childlessness might think when they read or hear about this book. (Yes, I know, I shouldn't care about what others think... old habits die hard...!)  Media hype being what it is these days, the subtleties of complex stories like this one often get lost, with the focus being on the more salacious details. And women without children have enough of a PR problem as it is, and face enough misconceptions, without people thinking that this is a "norm," that our marriages will suffer without the binding tie of children, that we're out looking for Mr. Goodbar and drowning our sorrows about not having kids with extramarital sex.

If anyone reads the book before I do, I'd love to hear your thoughts. (And of course, if/when I do read it myself, I will write about it here!)
Posted by loribeth at 5:31 PM