Book: "Girl in a Band" by Kim Gordon 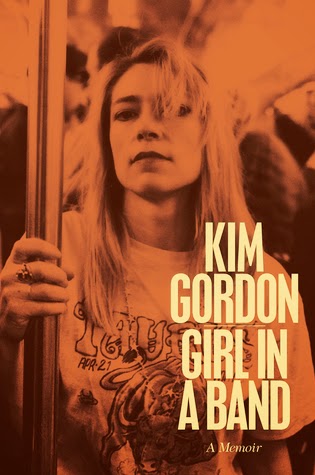 Confession: While I've heard OF Sonic Youth and Kim Gordon, I would be hard pressed to name one of their songs, let alone identify it in a game of "Name That Tune" or sing along to it.  They formed in 1981, when I was still at university, and Gordon (who is now 61, seven years older than I am) is sometimes identified as one of the "Riot Grrrrls" of the early 1990s -- but by that time, I had graduated, gotten married and started working. I think most of us tend to listen mostly to the music that was popular when we were in high school and university, and while I listened to a popular radio station that played "today's best music" for many years after my marriage, I don't think Sonic Youth ever got much commercial radio airplay. ;)

So why would I want to read a memoir by a musician I know so little about? Because I'd heard a little about Kim Gordon and the book had some good buzz around it. Because I'm a feminist and I applaud any woman who manages to survive (let alone thrive) in the boys' club that is still rock and roll (for almost 30 years!!). Because I wish more girls would embrace their inner rock goddess (a la Joan Jett and Chrissy Hynde (who apparently has her own memoir coming out this fall) ). ;)  Because I harbour secret dreams of being in a rock band myself. ;)  Because I was curious and wanted to learn more. Because I liked the cover. Because I thought it would be interesting to go into a book knowing next to nothing about the subject, a blank slate, and see what I thought about it.

I've since read some reviews of Gordon's memoir, "Girl in a Band," in the media and on Goodreads. Some Sonic Youth fans raved -- it was everything they'd hoped for. Some were disappointed -- TMI, or (flipside) not enough disclosure. If you're a Sonic Youth fan, caveat emptor.

My opinion?  I liked it. It's not a difficult read. It's well written, with short chapters, just a couple of well-spaced pages each, illustrated with black & white photos. Some people have compared it to Patti Smith's memoir, "Just Kids," which I reviewed here.  Both artists, both musicians, both women in a men's world, both writing about New York, albeit different time periods. Smith's book is longer and more in-depth.

If you're hoping for a comprehensive history of the band, this is not that book -- but Gordon does discuss how certain songs and albums came together.  She writes honestly about her childhood (I was surprised to learn she grew up as a surfer girl in California, and that she briefly studied art here in Toronto at York University, in the early 1980s), her schizophrenic older brother, her life as an artist, musician, fashionista, rock and roll mom -- and, finally, divorcee -- and yet you get the feeling she hasn't revealed everything. She's obviously trying to be circumspect in what she says about her ex-husband and bandmate of nearly 30 years, Thurston Moore -- perhaps for the sake of their daughter, perhaps because the wounds are still so fresh.  Her hurt and anger about his infidelity is clearly evident, but overall, I think she's pretty fair to him. She does write candidly about several other musicians, including Kurt Cobain, with whom she felt a spiritual kinship and adored in a kid-brother kind of way, and Courtney Love (whom she most definitely does NOT adore).

Since reading the book, I've checked out a few Sonic Youth videos on YouTube. They're not exactly easy listening  ;) but they had a discordant, punk rock sound reminiscent of some of the punk/new wave stuff I heard back in the late 1970s/early 1980s. I guess we just missed each other the first time around. ;)