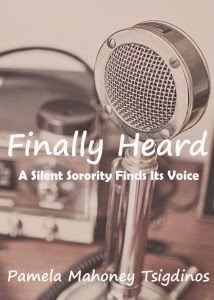 When I first started reading blogs some 7-8 (!!) years ago (and eventually screwed up the courage to start my own), the childless/free corner of the ALI community was a pretty small and lonely place.

That's why I was so thrilled, early on, to find another blogger whose situation so closely matched my own -- and not only that, wrote about it so very well.  As I once described it, finding Coming2Terms by Pamela Jeanne (as she was then known) "was like stumbling into an oasis in the middle of a desert."

In the years since then, Pamela has continued to write about, inspire and advocate for "infertility survivors."  In 2009, she published her award-winning memoir, "Silent Sorority." And now, we have "Finally Heard: A Silent Sorority Finds Its Voice." It's a short read, an inexpensive e-book available through Amazon, and readable on a Kindle e-reader, or on your computer or other device using Amazon's free Kindle software.

Much of the material covered in "Finally Heard" will be familiar to regular readers of Pamela's blog and other writing, but presented here in one cohesive document, it gains new impact. The topics she discusses in this e-book include:
There are also some questions at the very end of the book to prompt classroom or book club discussions. (They would also make great journaling or blogging prompts.)

During her post-IVF "coming to terms" journey, "I craved a mentor or role model who could show me that my life wouldn’t be ‘less than’ or empty for never having walked the well-worn parenthood path – for releasing a cherished dream," Pamela confesses.  But over time, as she encountered other women struggling to answer the question "what's next?" after unsuccessful infertility treatments, she realized, "When no obvious role model exists why spend all my time looking for one? Why not, instead, try to become one?"

Thank you, Pamela, for being such a great role model and mentor, for me and for so many others!