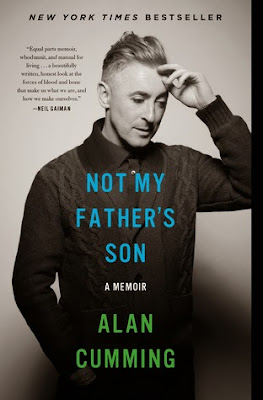 As an avid genealogist, I am a sucker for TV shows like Henry Louis Gates's "Finding Your Roots" on PBS and "Who Do You Think You Are?" on TLC. The shows follow a predictable format -- celebrities in search of their ancestors, with some jaw-dropping revelations along the way. There is much grumbling among us amateur genealogists about how much WE'd like to sail into an archive & have someone waiting for us with a ready-made family tree going back umpteen generations, and a pile of intriguing documents that answer our questions and shed new light on our ancestors' lives. ;)

But just as Alan embarked on this emotion-packed journey into the past, he received some shocking news about another figure from his past:  his long-estranged and now dying father, who brutally abused Alan and his older brother, Tom, as they were growing up.

"Not My Father's Son" goes back & forth between "then" -- Alan's memories of growing up on an isolated Scottish estate -- "now" -- and 2010, where two stories rapidly unfold at the same time:  the filming of WDYTYA, with some stunning  revelations about Tommy Darling's life and death, and Alan's reassessment of his troubled relationship with his father.

It sounds complicated (and it is) -- and the abuse that he describes is hard to read about.  As several Goodreads reviewers put it, there were several points in the book where I just wanted to give the guy a hug.

There are many episodes of "Who Do You Think You Are?" available on YouTube;  alas, Alan's doesn't seem to be one of them. If anyone finds a working link that's viewable in Canada, let me know. ;)