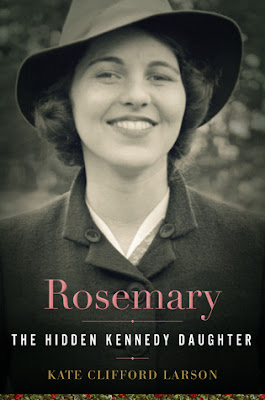 I've read many books about the Kennedy family over the years, so I was familiar with the story of Rosemary, Joe & Rose Kennedy's third child and oldest daughter: born with "intellectual disabilities" that were carefully hidden from the public, presented at court in front of the king and queen of England along with her mother & sister in 1938, lobotomized at age 23 in a botched operation orchestrated by her father, and then whisked away to spend the rest of her long life (she died in 2005 at age 86) in seclusion in the care of nuns at a convent in Wisconsin.

Long overshadowed by her more famous parents & siblings, Rosemary has finally been given a well-deserved turn in the spotlight by Kate Clifford Larson in her new book, Rosemary: The Hidden Kennedy Daughter. The book is full of new details, material and insights about Rosemary, her life and times. Larson puts the reader in Rosemary's shoes, reminding us what it must have been like to grow up in the highly competitive Kennedy family, but unable to keep up with your siblings and meet the extremely high expectations that your parents had for their children. She also reminds us what it meant to be "mentally retarded" (the term then used) in the early part of the 20th century: to have a person like Rosemary in your family was considered shameful, and there were very few resources, programs, or schools to support these children and their families. Of course, the wealthy Kennedys were far better equipped than most people to offer Rosemary every advantage they could find to help her -- a succession of private schools, camps, lessons and paid companions -- but at the same time, they strove to present a picture of normalcy, carefully guarding Rosemary's secret from the public, so as not to damage the family's reputation and social and political prospects.

As she grew older, Rosemary's frustrations manifested in increasingly rebellious and even violent behaviour. The most beautiful of all the Kennedy sisters, her parents feared she would be easy prey for unscrupulous men.  This led Joe Kennedy to decide -- without consulting his wife!! -- to subject Rosemary to a lobotomy, which was then a fairly new and untested procedure that was supposed to "calm" her. When it was over, Rosemary was reduced to a shell of her former self, physically disabled with the mental capacity of a two-year-old. What happened to Rosemary was not openly discussed within the family;  she just disappeared. Her mother did not visit her for 20 years (when she did, Rosemary was clearly furious). Older brother John paid her a private visit her during the 1960 presidential campaign. Gradually, her siblings began to understand what had happened to her, and to re-integrate her into the family. When she died in 2005, it was with her surviving brother and sisters around her.

Beyond Rosemary, her next-younger surviving sister, Eunice Kennedy Shriver, emerges as the heroine of the story: after her father's stroke, and as her mother aged, she assumed responsibility for her sister's care. Inspired in part by Rosemary, Eunice became well known as a tireless advocate for children's health and disability issues, and as founder of the Special Olympics. Senator Ted Kennedy, the youngest Kennedy sibling, was also well known for championing legislation that improved the lives of Americans living with disabilities.

This book is a reminder of how much things have changed in a very short time for people with disabilities -- and how much the Kennedy family, and Rosemary, had to do with that. It's a sad but important story that deserves to be told, and Larson has done an admirable job of bringing this long-neglected member of the famous Kennedy family out of the shadows.