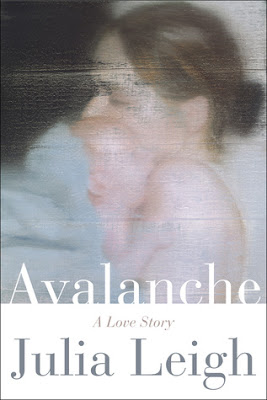 I am always up for a good "repro-lit" read -- especially when it reflects my own story (i.e., it doesn't end with a baby) -- and earlier this year, when Pamela first wrote about "Avalanche: A Love Story" by Australian writer and film maker Julia Leigh, I put it on my wish list. Unfortunately, it took some time before the book became available in Canada;  I was finally able to download an e-copy to my Kobo in August, after Pamela announced she'd be hosting a book tour with author participation. (I also love discussing books with other people!)

"Avalanche" is not a long book -- 133 pages -- but it packs a powerful punch. Reading it brought back a flood of memories from my own days in treatment (which you can read about under the label "The Treatment Diaries") -- not all of them good. It could be a difficult read, depending on where you are in your own infertility journey.

Leigh was 38 when she met, fell in love with and married Paul (they had actually met years earlier, then reconnected). The vision of Our Child (in capitals and italics) took hold in Leigh's mind, and quickly became all-consuming. Right from the start, however, there were challenges: besides Leigh's advancing age, there was also the obstacle of Paul's vasectomy. When a reversal was unsuccessful, he underwent a surgical procedure to retrieve and freeze his sperm. Before they got to use it, though, the marriage fell apart.

Leigh decided to try for motherhood on her own. Her ex refused to let her use his frozen sperm, so (while mourning the loss of Our Child, the child she had envisioned) she began the search for another donor. She finally found one, a willing male friend, when she was 42, and over the next two years, embarked on a series of ARTs, including egg retrieval and freezing, fresh and frozen embryo transfers, ICSI, IUIs and various "add ons" that Leigh's doctor suggested might (might! -- or might not... "It's up to you...") improve her odds of success ("embryo glue," anyone??).  She toyed with -- and rejected -- the idea of using a donor egg. Her sister offered to carry a baby for her. The treatments took a rising toll on her physical, emotional and financial well-being, until she finally reached the point where she knew she could not continue.

Reading "Avalanche" brought back a flood of memories for me, from the endless number of carrots offered that keep fertility patients coming back for more, right down to noticing the doctor's expensive car parked outside the clinic. From an emotional perspective, it's not an easy read (although it's beautifully written), but based on my own (far more limited) ART experiences, I think it's a pretty accurate one. It's something of a cautionary tale -- but it would be worthwhile reading for anyone thinking of embarking on ARTs, as well as anyone (including family & friends) who wants to know what women go through when they attempt ARTs. People -- and I include my pre-ART self among them -- often assume that "oh well, you/we can always do fertility treatments" without realizing exactly what that is going to involve -- that it's a slippery slope, that you'll find yourself crossing lines and doing things that you never imagined existed in the first place -- and (especially) that all your time, money, pain and effort will not necessarily result in a take-home baby. The mind-numbing litany of details contained in "Avalanche" might be shocking to the uninitiated -- but they also confirm to those of us who went through it (or something like it) that yes, this IS a Very Big Deal and not something that should be entered into lightly.

My main issue with the book, if I can call it that, is it left me wanting more. Leigh wrote the book shortly after she abandoned fertility treatments (which might account, in part, for its raw tone and vivid descriptions).  I am hoping for a sequel, or an epilogue to any future editions, because I would like to know how she is doing and how her life has unfolded since then.  (Of course, she is answering readers' questions as part of Pamela's book tour, so perhaps we'll hear something there about her life today!)

This review is part of a book tour organized by Pamela at Silent Sorority. Here's her post with all the details and a linked list of others who are participating!