"The Bridge Ladies" by Betsy Lerner 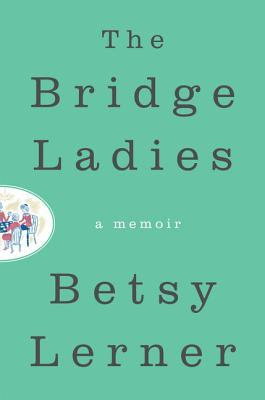 When her 83-year-old mother needed surgery in January 2013, writer and literary agent Betsy Lerner moved in to help her recover. And every day, at least one of her mother's friends from her bridge club arrived, bearing a meal or baking. Lerner had known these women all her life -- the ladies had been playing bridge together for more than 50 years (!) -- but found herself pondering the differences between their generation and hers, and the enduring bond her mother shared with them.

"I knew that if I were to get sick, there wouldn't be such a steady stream of friends visiting," Lerner writes. "I'd be lucky to get a few texts with smiley face emojis and some messages on my wall.  Facebook may connect us across the world and through eternity, but it won't deliver a pot roast."

Lerner started spending time with the Bridge Ladies, observing the game, and interviewing them separately about their lives. Eventually, she started learning to play bridge herself.

"The Bridge Ladies" is about mothers and daughters. It's about a generation of women who grew up in a much more restrictive time -- and the much different generation that came after them, and the inevitable conflicts that resulted. It's about friendship. It's about aging. And, of course, it's about bridge.

And (surprise!! -- slight spoiler alert)  it's also about death, and grief and loss, including a couple of ALI stories, including one that's a key part of the book. Obviously, I found these parts of the book among the most touching and thought-provoking to read.

Overall, I enjoyed "The Bridge Ladies." It was not the kind of story that propels you along, full of action, etc. -- but the further you read, the more you come to enjoy and appreciate these women and how they have played the hand that life has dealt to them.  Lerner (whom I estimate is a year or two older than I am...!) has a keen eye for detail and includes some great descriptions of the people and places in her story.

I have to admit, though, that my eyes often glazed over when it came to the bridge games described in the book.  Much as my family enjoys playing cards together, I have never played bridge. I don't think my parents have either. (Rummy and canasta, yes. Bridge, no.) (My godmother, on the other hand, who never worked after she got married, once belonged to three different afternoon bridge clubs. At the same time.) Lerner does explain the game as she herself learns about it (and agonizes over it), but I have to admit, these sections of the book could have been Greek for all I understood. I wonder whether someone who had at least a rudimentary grasp of the game would get more out of this book, in that respect, than I did.