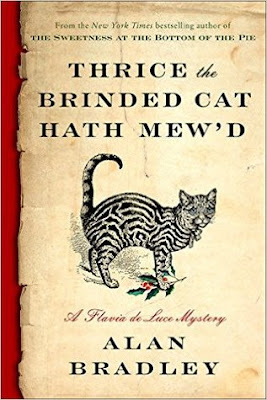 If you've been reading my blog for a while, you'll know I am a big fan of the Flavia de Luce mysteries by by Alan Bradley. Flavia is a pint-sized (age 12) chemistry buff who lives in a crumbling mansion called Buckshaw with her father and two older sisters, and uses science and her wits to solve a number of mysteries in and around her small English village of Bishop's Lacey in the early 1950s post-war England.

The long wait is finally over, and Flavia #8 is now in bookstores. I was fortunate enough to find a copy a few days before it was supposed to go on sale officially. (In fact, it's more than a week since the official release date and my local bookstore still doesn't have it. Grrrrr....)

Thrice the Brinded Cat Hath Mew'd picks up immediately where its predecessor (As Chimney Sweepers Come to Dust, reviewed here) left off. It's just before Christmas, and Flavia arrives home from a brief stint at school in Canada, expecting her family there to welcome her back. Instead, the only person there to greet her is the family retainer, Dogger -- and he has bad news: her beloved father is sick and in the hospital. Left to her own devices (even more so than usual), it doesn't take long before Flavia stumbles onto a new mystery to solve.

It was good to have Flavia back home with the familiar cast of characters around her. The actual mystery never seems to matter too much in these books -- it's the characters and the wonderful writing that hold our attention. While each mystery is self-contained, there's a continuing storyline unfolding that gradually reveals more information about Flavia & her family -- and keeps us coming back for more.  For that reason, I would highly recommend starting with the first Flavia book, "The Sweetness at the Bottom of the Pie," and working your way through the series in chronological order.

The mystery gets solved, but there's a cliffhanger at the end that had me gasping -- and reaching for the Kleenex box. I am not sure how long we have to wait for the next installment in the adventures of Flavia -- but it won't be soon enough to suit me!