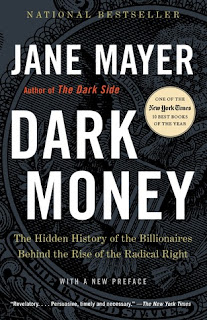 After reading "All the President's Men," I was still feeling in a political mood, so I decided to tackle a book that's been in my TBR (to be read) pile for a while now:  "Dark Money: The Hidden History of the Billionaires Behind the Rise of the Radical Right" by Jane Mayer.

As I said in an earlier post, while I was still reading the book:


"it is extremely well-researched and well-written. It's also infuriating, terrifying and downright depressing. But don't let that deter you from reading it. This is a book that NEEDS to be read. RIGHT NOW."

The paperback version I was reading includes a new preface that discusses the outcome of the 2016 U.S. election. Despite Donald Trump's populist schtick and lone wolf/beholden-to-nobody appeal, the overall results were a huge victory for the multi-billionaires who have been pouring hundreds of millions of dollars into influencing the last several elections (at all levels of government), as well as the policies those governments pursue -- policies which, of course, benefit them and their interests.

Mayer delves into the history of the key players behind the "dark money" that's been pouring into the system: the Koch brothers, the DeVos family (yet, THAT DeVos family!), the Bradleys, Richard Mellon Scaife, John Olin, Art Pope and others. She shows in detail how they have spent the past 30+ years pooling their money to systematically build an interlocking network of think tanks, academic institutions, media groups, courthouses and government allies that has fundamentally altered the American political system, overshadowed the official Republican Party, and undermined American democracy.

In particular, she shows how these billionaires have taken advantage of tax loopholes to fund their pet causes through donations to their own private foundations, and to nonprofit organizations that -- on the surface -- appear to be populist and grassroots-driven, with names such as Americans for Prosperity, Citizens for a Sound Economy and Center for Patients' Rights. In reality, most of these groups were manufactured and funded by corporate interests -- "astroturf" organizations, as opposed to truly organic grassroots movements.

"Astroturf" organizations exploded after the election of Barack Obama, and even more so with the ruling on the Citizens United case by the Supreme Court, which removed limits on corporate campaign funding and made it much easier for donations to be made anonymously. As a result, it has become increasingly difficult to identify where the hundreds of million of dollars flowing through the system are coming from.

There are dozens of revealing anecdotes (sample quote from Charles Koch: "I just want my fair share -- which is all of it"), including some unsettling personal stories from people who have challenged the billionaires -- or just gotten in their way. This includes Mayer herself. After The New Yorker published a story she wrote about the Kochs, she discovered a private investigator had been poking into her personal life. When they found nothing unsavoury there, Mayer was accused of plagiarism (charges that she quickly disproved, with full support from the writers she was accused of plagiarizing).

There is so, so much more to be said about this book, but I hardly know where to begin.

I consider myself fairly well read & informed about politics, in the United States as well as Canada. I had heard about many of these people before. I knew they were using their wealth and influence to try to sway public opinion and votes toward the causes they favoured.

But I didn't know the half of it. Reading this book is an eye-opener. The scope and impact of what the Kochs and their allies have achieved over the past few decades is truly stunning. And frightening.

To summarize:  this is a very important book, and the kind of book that we (a) need more of, and (b) need to read, NOW.

It may already be too late. (I hope not.)