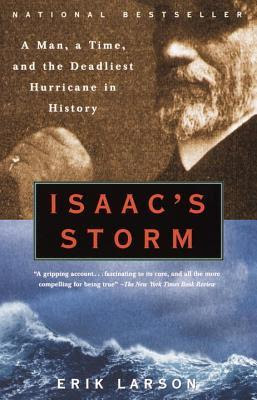 As Texas battened down its hatches in anticipation of Hurricane/Tropical Storm Harvey this weekend, I was reminded of a relevant book that's long been sitting in my "to be read" pile. The time seemed right to finally read "Isaac's Storm: A Man, a Time, and the Deadliest Hurricane in History" by Erik Larson, author of such other titles as "The Devil in the White City," "Dead Wake" and "In the Garden of Beasts" (all also in my TBR pile...!).

"Isaac's Storm" tells the story of the hurricane that devastated Galveston, Texas, on September 8, 1900, killing an estimated 6,000 people. It's still considered the deadliest hurricane in American history.  The story is told through the eyes and experiences of some of the survivors -- in particular, Isaac Monroe Cline, head meteorologist for the fledgling U.S.Weather Bureau's Galveston office.

Weather forecasting was (and still is, to some extent) a highly inexact science, and of course, the meteorologists of Isaac's day did not enjoy the benefits we now take for granted.  Beyond the lack of modern technology and knowledge about how hurricanes are formed and behave, a number of other factors contributed to the disaster.

For example, the Weather Bureau was engaged in an ongoing feud with its colonial counterparts in Cuba, and thus ignored critical information from the Cubans that might have ultimately saved lives in Texas. (Many people -- including Isaac Cline, who had infinite faith and pride in his own understanding of the weather -- believed that no storm could do serious damage to Galveston.)  Use of the words "hurricane" and "tornado" were discouraged by the bureau (they might frighten people unnecessarily), and only headquarters in Washington was allowed to issue an official storm warning. The bureau's September 8 forecast for Galveston was "fair;  fresh, possibly brisk, northerly winds."  As a result, the storm and its severity came as a complete surprise for the vast majority of Galveston's citizens.  Cline later claimed he had personally saved up to 6,000 lives by warning the crowds of people watching the unusual wave activity on the beach to seek shelter -- although there is no corroborating evidence of this.

I came prepared to like this book, and I plowed through its 273 pages of text (plus notes, bibliography & index) in just three days (started on Friday, finished on Sunday).  I've long enjoyed popular history, and have been fascinated with disaster/survival stories since I was a kid -- and Larson's account of the storm and its aftermath makes for a gripping read. While I've never been through a hurricane (and have no desire to encounter one...!), growing up on the Canadian Prairies means I have more than a passing acquaintance with extreme weather (tornados, hailstorms, ice storms, blizzards...). Moreover, I was born on the banks of the Red River of the North, where both sides of my family have lived (on both sides of the U.S./Canada border) since the late 1800s and endured one devastating flood after another. (The riverside house that was my first home no longer exists -- it was torn down after the flood of 1966 to accommodate the construction of a ring dike that has saved the town many times in the years since then.)

I gave the book four out of five stars on Goodreads -- but would really rate it about 3.5 (any Goodreads users know how to assign half-star ratings??). I'd give it a half-star less for several reasons:


Such "detective work and deduction" does make for a better story -- but these passages are more speculation than actual historic fact.

Despite these reservations, I enjoyed "Isaac's Storm" and thought it was a good read overall.  It's also a cautionary tale. While weather forecasting is still an inexact science, and we roll our eyes when predictions of severe weather ("Snowmaggedon!!") don't pan out, stories such as "Isaac's Storm" remind us of why it's unwise to underestimate or ignore Mother Nature. My own philosophy is that it's better to be safe than sorry.  Take weather warnings seriously, be prepared and stay safe!  :)