"The Tall Stranger" by D.E. Stevenson 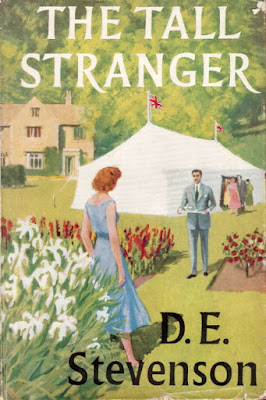 Yay, I finished my first book of 2018!  :)   And what better way to ease my way into a new year of reading than with a new (to me) novel by one of my favourite authors, the ever-reliable D.E. Stevenson.

I've read & reviewed several Stevenson books on this blog before. Until her death in 1973, DES, a distant cousin of Robert Louis Stevenson, wrote charming light romances featuring well-drawn characters (with strong females being a specialty) and lively dialogue, often set in the vividly described Scottish border country. I loved reading her books during my teenage years, and I was happy to rediscover her a few years ago:  some  of her books have recently been reissued in print, e-book and audiobook formats (alas, not all -- yet!!), and there is a Yahoo group devoted to reading, discussing and promoting her work.

Our group's current discussion is focusing on "The Tall Stranger," originally published in 1957. We already met two of the main characters previously in "Five Windows," and there is a visit to Ryddelton in the Scottish border country, the setting of  several other DES books.

("The Tall Stranger" is currently out of print but, thanks to the Internet, I was able to source a slightly musty used copy at a (relatively) reasonable price -- although the shipping -- all the way from New Zealand, as it turned out! -- cost as much as the book itself...!)

The plot of "The Tall Stranger" is predictable in some ways, but the characters are so well drawn & the story moves along so easily, it's forgiveable.  Successful interior designer Barbie France is laid low, mentally & physically, by illness, so her roommate and best friend Nell arranges to send her to her Aunt Amalie's home to recuperate. While there, she has her teacup read and is told to beware a tall stranger -- perhaps Henry Buckland, whom she meets at a friend's wedding?

ALI notes: Adoption, loss & infertility matters are not major plot points, but do figure somewhat prominently in this book.  Barbie's Aunt Amalie is a childless widow who raised both Barbie (daughter of her late brother) and Edward, the son of her late husband, as her own (and secretly hopes they will marry someday).  There's Agnes, a neglected waif who lives with her flighty mother, Glore, across the hall from Barbie and Nell. (Much as I disliked Glore and the way she (mis)treated her daughter, I also found it somewhat jarring how blithely Barbie & Nell assume they could easily arrange to have Agnes removed from her mother's custody and adopted. Oh, the innocence of the 1950s...!)  And there's Bet, who claims to have a mysterious (imaginary?) playmate named Rose Ann.