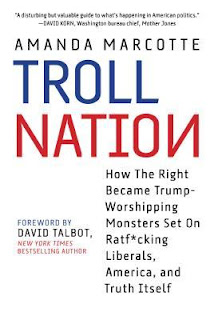 1.To fish for by trolling
2.a: to antagonize (others) online by deliberately posting inflammatory, irrelevant, or offensive comments or other disruptive content
b: to act as a troll

I have been reading Amanda Marcotte's work on Salon.and other (mostly online) publications for several years now, and following her on social media. Raised in Texas, she has made a name for herself writing about feminism, environmentalism, and the ongoing culture war politics of the United States.

As you can imagine with a provocative subtitle like "How The Right Became Trump-Worshipping Monsters Set On Rat-F*cking Liberals, America, and Truth Itself ," Marcotte's latest book, "Troll Nation," will likely NOT appeal to anyone who voted for the current occupant of the White House. ;)

For those of us with a more liberal bent to our politics, though ;)  Marcotte's book is a good look at how our political discourse (and not just in the U.S.) has been hijacked by trolls, mostly coming from the right wing of the political spectrum.

"...trolling liberals is no longer considered just a fun sport, but the ultimate purpose of conservative politics," Marcotte writes. "The idea of making a positive argument in favor of conservative values has atrophied, leaving only the desire to troll in its place."  (p. xvi)

Marcotte looks at how this "desire to troll" has played out in the areas of political correctness, women, the environment, health care, guns, race, conspiracy theories and the media. She also profiles "case studies" of some recognizable right-wing public figures who have contributed to the current environment.

(Personally, I find it hard to believe that the desire to annoy liberals is the ONLY thing going on with the right today... but it does explain a lot...!)

My one major reservation/complaint about this book is that Marcotte offers little in the way of ideas as to what can be done to restore a more reasoned/factual/respectful/civil tone to public life. "We can't fix troll nation," she concludes. (p. 184)  But she finds a glimmer of hope in the fact that Hillary Clinton received more votes than Donald Trump in the 2016 election. "And the blunt fact of the matter is that it was only so close because so few Americans vote... we've had the power this whole time. We just need to channel it."  (pp. 184-185)  In other words, get out & VOTE, people!

Overall, I thought this was an engaging and (mostly) well-written read. (As a couple of reviewers noted on Amazon.com, Marcotte's writing does tend to hyperbole at times... and there were a few typos that detracted from my overall enjoyment of the book -- it's the editor in me...!)  I rated it four stars on Goodreads -- I would have voted 3.5 if I could figure out how to assign a half star. ;)  It's not long, a slim volume and a quick read, under 200 well-spaced pages in a generous type size.

If this sounds interesting to you, and you'd like to sample the book before buying or borrowing to read further, the introduction is available on Salon, here.