"Conversations With Friends" by Sally Rooney 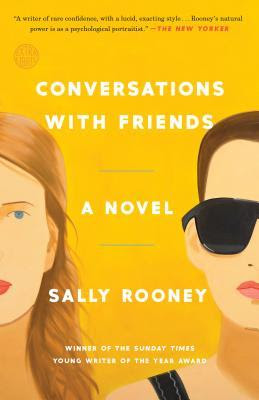 I bought "Conversations With Friends," the debut novel by Irish millennial author Sally Rooney, shortly after I first read "Normal People" (which I reviewed here and again here).  A few people have said they liked it better than "Normal People."

I'm not sure I agree. Despite their faults, I sympathized with "Normal People" 's Connell and Marianne and found myself rooting for them, despite their annoying habit of pushing each other away and then coming back together, over and over again. The characters here simply didn't grab me in the same way (although there were echoes of "Normal People" in some of the characters' backgrounds and traits and plotlines -- or I guess that should be the other way around, since this book actually came first? There's even a minor character named Marianne here, a friend of Frances's.  And, of course, it's also set in Dublin.).

The story involves two former school friends turned lovers turned friends again, Frances and Bobbi, whose lives become strangely intertwined with with an older married couple, Melissa and Nick, a writer/photographer and actor. None of the characters are particularly likeable -- although I did gain some sympathy for Frances as the story progressed. (Hey, she's just 21 -- I did some pretty dumb things at that age too.)  I found Bobbi especially irritating -- maybe because I've known too many girls like her?

But it's still very well written -- an impressive debut for such a young writer. (Rooney was just 26 when "Conversations With Friends" was published.) I did find myself more engaged in the book towards the end.

I understand a TV adaptation is in the works, in the wake of "Normal People" (the TV series)'s smash success. Maybe it will flesh out the book for me and enhance my appreciation of it, in the same way that the TV version of "Normal People" did?

I rated "Normal People" four stars. Since I didn't like this one quite as much, I'm not sure I can give it four stars too. So I'm giving it three stars on Goodreads, but really closer to 3.5, particularly taking the last one-third of the book into account.  :)

ALI alert:  Frances's gynecological issues might be somewhat triggering for some readers.

And I marked this passage from the book with a sticky note, near the end. I thought it kind of spoke to the moment we're all living in right now -- but it could also apply to infertility too:

Gradually the waiting began to feel less like waiting and more like this was simply what life was: the distracting tasks undertaken while the thing you are waiting for continues not to happen. (p. 276)