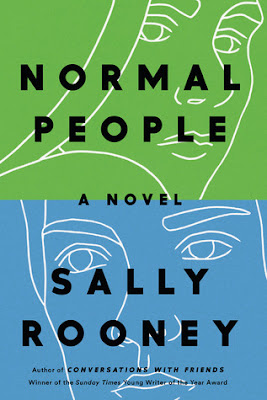 Thank you for bearing with me as I watched (& raved about, here on this blog, lol) the television adaptation of Sally Rooney's novel "Normal People" these past six weeks.  I watched the final two episodes yesterday, and then finished re-reading the novel. I'd been following along as the episodes unfolded, two at a time.

I sobbed through the last 10 minutes or so of that last episode (much to dh's bemusement, lol)... not just because of Marianne & Connell's story, and how beautifully it was unfolding on screen, but also because it reminded me of my own youth & my own story, mine & dh's.

I did not have Marianne's abusive family issues (thank goodness!).  But I could relate to her insecurity and lack of self-esteem. Like her, I was considered "smart" and bookish as a child/teenager, and thus regarded as a bit of an oddity in school. Thank goodness for school band and drama club in high school, because otherwise, I didn't really feel like I fit in. In many ways, life for me began at university (as it did for Marianne).

My relationship with dh (whom I met in my third year) was nowhere near as fraught as Connell & Marianne's, but we did find ourselves thrust into a long-distance romance that summer, when he didn't get accepted into the MBA program at the university where we met (but did get accepted to two other schools elsewhere). I stayed in Manitoba & finished my four-year bachelor of arts program while he went through the first year of business school. This was in the early 1980s, long before the Internet, or even cheap long distance telephone calls. We wrote & sent each other actual pen & ink letters (all of which I still have), and called each other on the phone once a week for an hour or so (and then I hustled like crazy for tips at my part-time waitressing job at a pizza restaurant, so I could pay the phone bill without asking my parents for extra money, lol). And he came to visit me a couple of times, over Christmas & study week.

The next spring, I applied to several journalism programs and got accepted to one at a school two hours by train away from his. It was a year-long program that started in May and went through to the next April (with breaks in August and at Christmastime). We saw each other just about every weekend -- in his city or mine, or we'd meet up on the train and travel into Toronto to visit his family.  Then we both graduated (and got engaged, and started planning a wedding for the following year).  He went back to Toronto to look for work, and I went back to live with my parents, and unexpectedly found a reporting job there to fill my time and pad both my pocketbook & my resume until we were married. (Living together was not an option for us, and with no jobs and no money, we didn't have a whole lot of choices.)  My parents & I spent time with him & his dad that summer when we came east to attend my convocation.  He came west for visits later that summer, and for Christmas, and for our marriage prep weekend, and I came to Toronto later that spring, before our wedding, to apartment hunt.

And next week we'll have been married 35 years. Sometimes these things do work out. :)

Four Goodreads stars (again) for the book. Unlimited stars for the TV version. Seriously, if there is justice in the universe, it will win every award it's eligible for. It's wonderful. :)