"Do You Feel Like I Do?: A Memoir" by Peter Frampton 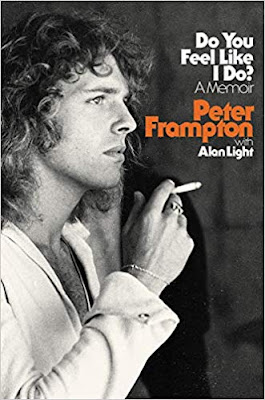 One of the biggest albums when I was growing up in the 1970s (and one of the biggest albums ever, period) was "Frampton Comes Alive," the 1976 double live concert LP by British-born guitarist Peter Frampton, formerly of the bands The Herd and Humble Pie. Believe it or not, I didn't own a copy -- but then I didn't really need to, because the songs were all over the radio, and all my friends had it. ;)
Frampton was already well-established as one of the best guitarists in the business, and I enjoyed his music, but as a 15-year-old in 1976, I think the main attraction was that he was damned cute, lol. (And still is, at 70! -- even without that glorious mane of hair, lol.) (The teenybopper image and the emphasis on his looks drove him nuts -- sorry, Peter!)  I even endured sitting through the godawful 1978 movie version of "Sergeant Pepper's Lonelyhearts Club Band" just to see him as Billy Shears (with the Bee Gees also starring as the Hendersons).  The walls of my first-year university dorm room were plastered with posters, but the two dominant ones, side by side, were of Dr. Teeth & the Electric Mayhem of The Muppet Show and Peter Frampton. ;)  (See below for proof!)

So I was eager to scoop up a copy of Frampton's memoir,  "Do You Feel Like I Do?"  when it came out last month (COVID be damned -- this was worth risking a trip to the bookstore, lol).

Frampton got the guitar bug as a child (his first guitar hero was Hank Marvin of the Shadows) and quickly became something of a prodigy, getting involved in bands when he was barely into his teens. He became friends with a guy at school who also played the guitar -- an art student of his father's, named Dave Jones, who later became better known as David Bowie. When Frampton's career slumped in the 1980s, Bowie hired him as a guitarist on his Glass Spider tour, and helped him redefine his career. Also as a teenager, Frampton was introduced to Bill Wyman of the Rolling Stones, who became a mentor and lifelong friend.

I'll admit, I thought this book dragged in parts, particularly through Frampton's retelling of the early years of his career. I probably could have done without the exhaustive recounting of what seemed like every gig he ever played and every musician he ever played with. There's lots of name dropping -- often prefaced by "my dear friend..." -- Peter seems to have lots of "dear friends," lol.  There's the usual tales of sex, drugs & rock & roll, naivete, ripoffs, bad business decisions and just plain bad management.

The story picked up with the success of "Frampton Comes Alive," and the pressures it placed on Peter to come up with something just as enormous. He has some great stories to tell:  the best is probably how he lost his favourite guitar in a plane crash in 1980 -- and then, incredibly, was reunited with it again, 30+ years later, just in time for his Frampton Comes Alive 35th anniversary tour. Frampton has dubbed it "Phenix," and the guitar becomes a metaphor for the rise, fall and rise again of his long, storied career.

Sadly, in 2015, Frampton was diagnosed with inclusion body myositis (IBM), an inflammatory disease that weakens and atrophies the muscles in the arms, hands, and legs. Since then, he's been recording like crazy, stockpiling material in anticipation of the day when he can no longer play guitar.  (The UK/European leg of his farewell tour was cut short earlier this year by COVID-19.) He's also dedicated himself to raising funds and awareness for IBM and other autoimmune diseases.

Peter Frampton seems like a genuinely nice, decent, good-humoured guy who, despite some slip-ups and moments of bad judgment, eventually carved out a long-lasting career for himself as one of music's all-time greats, and who is determined to make the most of the time & remaining good health that he has left on this planet.  I saw on Instagram recently that he finally met his granddaughter, born earlier this year, for the first time, because of COVID-19. He refers to himself as "Frampa,"  lol.

If you're a Frampton fan, this is obviously a must-read. Even if you're not a huge fan, if you grew up in the 1970s as I did, you will probably enjoy the nostalgia trip.