"The Child Catchers" by Kathryn Joyce 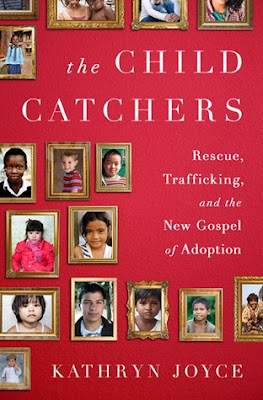 I had just finished reading "American Baby" (reviewed here) when another adoption-related book caught my eye -- recommended in a Jan. 13th post by Nora McInerny (of the podcast "Terrible Thanks for Asking") on her borealisbooks Instagram account.

It took me longer to get through "The Child Catchers: Rescue, Trafficking, and the New Gospel of Adoption" by Kathryn Joyce than my 24-hour speed read of "American Baby" -- it's a longer book, with an incredible level of detail to wade through -- but it was still an absorbing read and a solid work of investigative reporting. Joyce examines how Christian churches -- mostly Protestant evangelical denominations, but also Catholics and Mormons -- have become a driving force behind the rise in both domestic and international adoptions. Adoptive families now include not just infertile couples, but families who already have biological children but feel "called" to add to their families by adopting one or more (sometimes many) children.

There are several key reasons why adoption has become a popular cause in Christian churches, which Joyce expands on throughout the book. First, there's the idea that adoptive relationships mirror the relationship we have with God (God has "adopted" all of us as his children).  Second, adoption has become a big part of anti-abortion politics (Christians urge women to put their babies up for adoption instead of having abortions, so perhaps they should adopt some of them themselves?). Finally, adoption is seen as a means of fulfilling "the Great Commission" -- the Biblical mandate that Christians spread the Gospel (which commands them to care for widows & orphans). Effectively, Christians see themselves as "saving" the children they adopt twice -- first, from a life of poverty and neglect, and second from a life without God.

Unfortunately, increased interest in/demand for adoption has led to supply issues, and increased pressure to find more and more babies and children to adopt.  Fewer children are available for adoption in North America today (because of better/easily available birth control and safe and legal abortions, as well as reduced stigma around single motherhood) -- but mothers at home and abroad (Joyce details past and present adoption programs in South Korea, Guatemala, Haiti, Ethiopia and Liberia, among others) are (still) being pressured into relinquishing their children for adoption, often without knowing exactly what they are agreeing to.

The numbers of "orphans" supposedly needing homes varies wildly, depending on which sources you consult and how you define "orphan." (Some suggest that any fatherless child might be deemed an orphan -- i.e., single mothers are, by definition, unsuitable parents.)  Joyce makes the case that many children being adopted from abroad are not "true" orphans:  many have living parents, siblings, and/or other relatives who might care for them -- some of whom believe their children are being given the opportunity to attend school in the States and will return to them in a few years' time. While many families are sincere in their desire to adopt, and many children are happy with their new families, there have also been failed adoptions and cases of physical and sexual abuse. This has given rise to some interesting new movements among adoptees and birth mothers to reconnect adoptees with their birth families and cultures, and to influence adoption policy.

If you're interested in the subject of adoption -- or telling childless/infertile women like me that we should "just adopt" -- you need to read this book.  (It was published in 2013, and I find myself wondering how much -- or how little -- has changed in the years since then?)  I consider myself fairly well read on the topic, but this was still an eye-opener for me in many respects.