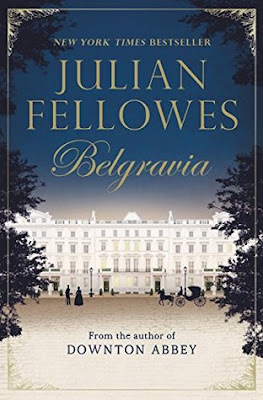 I decided "Belgravia" by Julian Fellowes would be my next read, because the six-part television adaptation is scheduled to begin on CBC TV tonight (Sunday, Feb. 14th -- Valentine's Day). I think I will watch (on PVR, if not live), and I always like to read the original book version ahead of the TV series or movie, if possible.

Fellowes is perhaps best known as the creator of "Downton Abbey" -- and there are some similarities to DA:  themes of class consciousness and divisions, upstairs/downstairs characters and plots, long-hidden secrets that threaten to be revealed, illegitimacy, arranged marriages, rivalries inside and between families...  basically, a soap opera, lol.  ;)  (With perhaps a bit of fairy tale thrown in, too.)

But there are differences too, particularly in the timeframe covered. "Downton Abbey" covers the years 1912 to 1927.  "Belgravia" opens in Brussels, Belgium, in 1815 -- almost a full century earlier -- on the eve of the historic battle at nearby Waterloo.*  Young Sophia Trenchard, the daughter of the British army's chief supplier, is more concerned with wangling an invitation to the Duchess of Richmond's ball, where her secret romantic interest, Viscount Edmund Bellasis, the future Lord Brockenhurst, will also be present.  The ball sets the stage for the rest of the novel, which takes place 25 years later (mostly) in London, when secrets from the past threaten to ruin the ambitious Trenchard family and their hard-won place in the society that revolves around Belgrave Square.

If you like "Downton Abbey" or novels and films from the Victorian era, you will probably enjoy "Belgravia."  It covers a lot of the same territory (to the point of being somewhat predictable -- although there are a few plot twists -- perhaps a few too many to be plausible...!).  But overall, it was fun and enjoyable.

At least, I enjoyed it until almost the very end...!

ALI/PLOT SPOILER ALERT!:  The plot involves (among other things) an obsession with producing heirs and inheritances (which I recognize was par for the course at the time), would-be grandparents longing for grandchildren, a death in childbirth, adoption, and a long-childless couple, including (towards the end of the book) a discussion about whose "fault" their infertility was. Up to that point, I was thinking I would rate the book 3.5 stars, rounded up to 4. This discussion, however, was so cliched and so infuriating to me (albeit I recognize it's a discussion that has happened, and certain in that time period) that I'm afraid I had to knock the rating down a bit, instead of up.

(*Personal side note:  I knew, from previous genealogy research, that my great x4 grandfather, born in County Leitrim, Ireland, was a sergeant in the British army around the time of the War of 1812. But I recently learned, after finding a brief family history written by his great-grandson -- a first cousin of my great-grandmother's -- that he was at Waterloo with the Duke of Wellington.  Not only that, BUT! his son, my great x3 grandfather, was also there with him -- as a drummer boy!!  He was born around 1806, meaning he was about 9 years old at the time. Can you imagine??!)