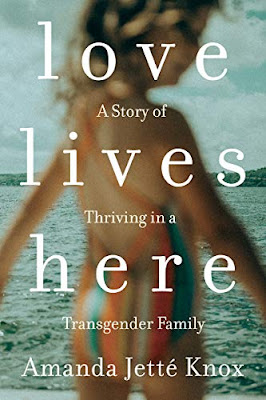 Back in high school, in the late 1970s, one of my classmates was a girl -- at least, she had a girl's name (I'll refer to her here as J and "her," since that's how I knew her then) -- but she looked, sounded, dressed and acted like a boy. She was painfully shy in the classroom -- although she was in her element on the sports field.  We all knew J was "different," but kids back in the 1970s (and certainly in small Canadian Prairie towns like ours) simply did not have the vocabulary to name and talk intelligently about it. (Kids? Heck, adults too.)
Remarkably for those less enlightened times, no one ever openly harassed J (that I knew of). On the contrary, it seemed to me that J commanded a certain level of respect because of her athletic ability.  Even so, J skipped our high school graduation ceremony (the only classmate to do so), which seemed very sad. Everyone whispered it was because she would be expected to wear a dress. Coincidentally or not, my class was the last where girls wore long formal dresses and guys wore suits to grad. The following year, when my sister graduated, her class voted to adopt caps & gowns for everyone. I sometimes wondered whether J would have attended grad, if we'd done the same thing.
*** *** ***

I thought about my classmate, and about how much has changed (and how much hasn't), as I read "Love Lives Here: A Story of Thriving in a Transgender Family" by Amanda Jette Knox, this month's pick for my "Clever Name" online book club. We'll be discussing it at via Zoom later this month.

I did not realize until I opened my copy that Knox is Canadian, from the Ottawa area -- or that she was a blogger (known as "The Maven of Mayhem" -- she still uses this handle on social media).  I knew there was some "buzz" around this book, and that it involved a member of Knox's family "coming out" as transgender.  It does -- but let's just say there's a whole lot more to the story...!

Amanda had a troubled youth, dropped out of high school and spent some time in rehab, got pregnant and got married at the relatively young age of 20.  The one thing she felt she was good at was parenting. And then one of her children sent her an email that changed her life forever and challenged her self-image as a successful parent.  Although she struggled to come to terms with this revelation and what it meant for her family (especially at first), she quickly became a fierce advocate for her child (and, later, for trans and LGBTQ issues generally), and realized that leading with love was the key to making this transition as smooth as possible.

(As a blogger, I found it interesting that her first inclination was to shut down her blog to protect her family. She kept blogging after her children challenged her to be honest about their family's experiences. She continues to blog at her website, and you can go there to find out what's happened since the book was published in 2019.)

This was one of those book club picks that I probably wouldn't have read on my own, and I learned a LOT from it. It's very readable/accessible, written in a chatty, conversational style (one Goodreads reviewer said Amanda's writing "reminds me of the blogging days of yesteryear").  As a non-mom, I sometimes struggled a bit with the "fierce momma bear protecting her cubs" stuff, but overall, I was impressed by Amanda's honesty, heart and sense of humour.  I haven't read a lot of (any??) books on transgender issues, and (for me, anyway) this was a good introduction to the topic.