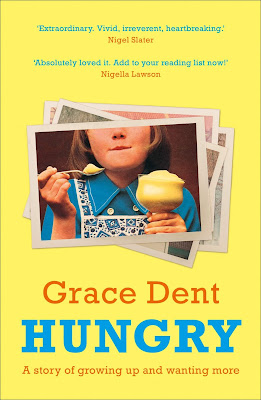 I must admit, I had never heard of Grace Dent, before her memoir -- "Hungry: A story of growing up and wanting more" -- was announced as the July selection for our Gateway Women/NoMo book club (no miracle pregnancies allowed!).  By reading the book description & author blurb, I gathered that she was a well-known food writer and TV personality in Britain, currently at The Guardian.

Things started out auspiciously with an epigraph from Ena Sharples, a character from the long-running soap opera "Coronation Street," which my mother has watched faithfully on CBC TV for years & years (albeit at a few weeks' delay from the episodes shown in Britain). (Queen Elizabeth recently visited the set to mark its 60th (!!) year on television.)  Since we didn't get any other TV channels but CBC until I was 14 (and even then, don't touch the TV while Mom's soap is on!!), I well remember Ena as one of the old ladies raising a glass at the Rovers Return pub.

"Hungry" follows Grace (born in 1973) from her childhood in a working class family in northern England to university in Scotland to clawing her way into writing for increasingly more prestigious publications in London -- eventually as a food critic -- and also appearing as a television commentator. There's plenty about food along the way, as the title suggests (from the tin-can fare and convenience foods of Grace's childhood to some of the most expensive restaurants in London), but also about Grace's family, and in particular her relationship with her father. "My only little girl," he'd call her (except Grace discovered that wasn't true: her father had been married previously and had two other daughters, as well as a son from another previous relationship).  At the height of her career, she moves back to Cumbria to help her brother care for her aging parents.

The geography, the brand names and the dishes that Grace writes about might not have been familiar to me, as a Canadian/North American -- but food, family, growing up and growing older are something we can all relate to. This book was funny (the description of Grace dressed up like a Christmas pudding for the cover of the Christmas edition of the Guardian magazine had me in stitches) and poignant and full of sharp observations about family and class and ambition and the publishing world and foodies and so much more. The writing is amazing. I bawled my way through the entire final chapter, including the shopping list from Grace's last-minute Christmas Eve trip to the supermarket.

And now I'm off to open a can of Campbell's soup and brown some hamburger and onions and cook some noodles and make my own version of Grace's childhood comfort food -- what my American mother refers to as "Minnesota Lutheran potluck cuisine," and what my relatives there would refer to as "hotdish." (You might call it a casserole, lol.)