"The Lost Symbol" by Dan Brown 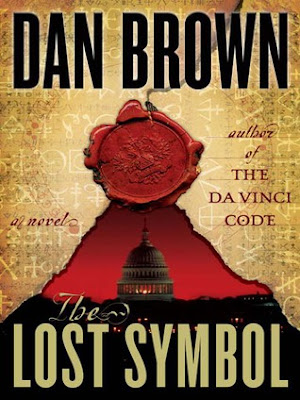 "The Lost Symbol" is the third of five mysteries/thrillers by Dan Brown, featuring Harvard professor/symbologist Robert Langdon. Tom Hanks played Langdon in movie versions of  "Angels & Demons," "The DaVinci Code" and "Inferno," and I'd read and (mostly) enjoyed all those books and seen those movies with dh. (The only one I haven't seen or read now is the most recent one, "Origin.") (I reviewed "Inferno" on this blog, here.)

I recently saw an ad for a new TV series/adaptation of "The Lost Symbol." It's already being aired/streamed on the Peacock streaming service in the States right now, but it starts here on Oct. 11th (on Showcase). I always like to read the book before I see the film version, if possible, and I was able to find a cheap copy for my e-reader, so I picked it up and started reading.

As with most Brown/Langdon novels, this was a fast-paced book that kept me turning the pages (waaaayyyyy past my usual bedtime last night, in fact, to finish it!). The previous Langdon novels I've read mostly took place in Europe:  Paris, London, Scotland, Rome, Florence, Istanbul. This one (aside from the opening and some flashbacks) is set entirely in Washington, D.C.

As the book opens, Langdon receives a phone call from the assistant of his old friend Peter Solomon, asking him to fill in as guest speaker at a dinner at the U.S. Capitol that very same evening. But when Langdon arrives at the Capitol, there is no dinner -- just a disturbing object, encoded with symbols that Langdon recognizes as Masonic. Then he learns Solomon has been kidnapped. Over the next few hours, to win his friend's freedom, Langdon must decipher and follow the Masonic clues to unlock some powerful ancient secrets. As usual, there's a pretty girl (Solomon's sister, Katherine) tagging along for the ride.

As I wrote in my previous review of "Inferno":

Having read previous Brown/Langdon adventures "The Da Vinci Code" and "Angels & Demons" (as well as seeing the movie versions), I knew what to expect... You don't need to have read any of Brown's previous books to understand or enjoy this one. They aren't great literature, but they're generally fun, and you learn a bit about history and art and religion (and, in this case, science) along the way.

I think that description fits this book as well. As dh said to me last night when we were discussing Brown's novels, "They're kinda dumb, but they're incredibly entertaining."

3 stars on Goodreads. I'll let you know how the TV version stacks up to the book!