"The Storyteller" by Dave Grohl 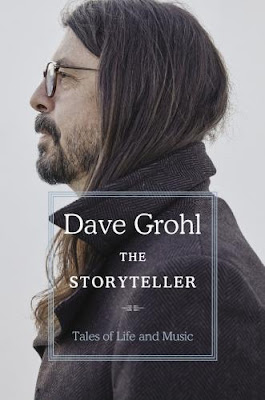 By the time Nirvana hit the big time in the early 1990s, I was in my 30s and absorbed in my work in the corporate world, my marriage, home ownership, and musing over when the "right" time would be to start a family. I still listened to the radio, but I was starting to lose touch with what was considered popular, and I'd kind of left things like punk/grunge bands and combat boots and mosh pits behind me.

I knew who Nirvana was, of course (you couldn't miss "Smells Like Teen Spirit," the song or the video, if you were around back then) and I even knew enough about the band to remark to dh that we were passing through Kurt Cobain's hometown, when a road trip from my great-aunt's home near Seattle to the Oregon coast in 1993 took us through Aberdeen, Washington... but I can't say I was a big fan or follower. (I actually like/appreciate their music more these days than I did back then.)

Likewise, when Nirvana drummer Dave Grohl formed a new band called Foo Fighters in the aftermath of Cobain's 1994 suicide, I was aware of it (that weird name...!), but didn't really follow them that closely. Until just a few years ago, I probably couldn't have named or hummed any of their songs to you. I think I gradually became aware of Grohl as a personality, before the Foo Fighters' music. I saw him interviewed several times, and heard other rock stars talk about him. I read some of the articles he's written -- including one of several he's done for The Atlantic, about public school teachers (his mom was one of them). (She wrote her own book before he did, interviewing other rock stars' moms. I'd love to read that one too!)  He impressed me as being funny and thoughtful and eloquent -- and, at times, hilariously profane. :) The more I heard about and from him, the more I liked the guy.

And then I heard he'd written a book as a project to keep himself occupied during the pandemic.

"The Storyteller: Tales of Life and Music" is not a memoir in the usual narrative sense ("and then this happened..."). It unfolds more or less chronologically, but it's more like a series of short stories/vignettes from Grohl's life, making it very easy to dip in & out of.  (I bought this one and Stevie Van Zandt's "Unrequited Infatuations" on the same day, and it was a toss-up as to which book I would read first. Dave won!)

The book covers his childhood (in a typical 1970s suburban neighbourhood in Virginia, near Washington, D.C.), early musical experiences (he used to go to jazz clubs with his mom, and a cousin took him to a club in Chicago to see a punk rock band when he was 13), Scream (his first band), Nirvana, Foo Fighters, marriage and fatherhood (three daughters, now aged 7 to 15) and more. Some of the stories are poignant, some hilarious. Along the way, there are cameo appearances by/anecdotes about the likes of Iggy Pop, former President George W. Bush, Paul McCartney, Tom Petty, Neil Young, AC/DC... "Bedtime Stories with Joan Jett,"  anyone??

And yes, he writes about the death of Kurt Cobain -- but also about the similarly premature death of his friend Jimmy Swanson, turning the chapter into a lovely meditation on surviving grief and loss.

Nirvana/Foo Fighter/Grohl fans will love this book, I'm sure -- but if you grew up in the 1970s, or if you like music, or memoirs, or just plain old great writing, you should pick it up too. It's a fabulous read!  (As I said, I knew I was going to love it. I did!)

I would also recommend that you follow Grohl's Instagram account "Dave's True Stories" for more great stories, including some that didn't make it into the book.