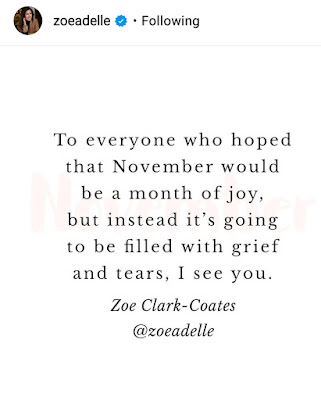 I recently started following Zoe Clarke-Coates on Instagram... she runs Saying Goodbye in the UK, which (among other things) organizes remembrance services for anyone who has lost a much-wanted baby (even if he/she only existed in your heart).

(Have any of you ever been to one of their services? I am not in the UK so obviously, I have not -- but I have been to holiday candlelighting services sponsored by the pregnancy loss support group my dh & I attended and later volunteered for, and they were SO helpful... it was lovely to carve out some quiet time during a busy holiday season filled with happy families and a focus on joy joy joy to remember our little girl in the company of others who were remembering similar losses.)

Anyway -- I bookmarked this post when I saw it because it had so much personal resonance for me.(Apologies to longtime readers, for whom this post will be a bit of a rehash of things I've written about previously here on this blog... but it still felt good to write it all out again...!)

Nov. 14th was my original due date for my ill-fated pregnancy in 1998 -- although it got pushed further and further back, before my pregnancy ultimately ended at 26 weeks in early August.

I was so looking forward to her November birthday, for all the usual/obvious reasons anyone looks forward to welcoming a baby into their lives -- but also for a few specific personal ones. November has never been one of my favourite months -- it's generally dark and cold and dreary in my part of the world, and the only reason it comes second to February in my estimation is because there's Christmas to look forward to, lol. When I told my mother I was pregnant and that I was due in November, her first ecstatic words were, "A baby for Christmas!"  (Ouch. That one still hurts... :(  )

Also, my company's year-end was October 31st -- and I was part of the team that worked on the annual report. The finance department took care of the financials, but we looked after the pretty pictures and words at the front of the book, and made sure all the facts and spelling were correct, and all the necessary executive and board signoffs were received, etc.  We were also responsible, at least in some significant ways, for our corporate social responsibility report (another important annual reporting document) and the annual meeting, usually held sometime in March/April. I always managed to take at least a few days off at Christmastime to be with my family in Manitoba (thankfully!) -- but generally, October, November & December (and the first few months of the new year) were an extremely busy and stressful time at my office. I was VERY much looking forward to a reprieve that year!!

Instead, I found myself returning to work that year in mid-October, right around the time that the year-end stuff was heating up. I worked in that department for that company for almost 28 years and I worked on every single annual report during that time, as well as those other year-end activities. Every year for the next 16 (!) years after my loss, November 1st came like a slap in the face, reminding me of my unfulfilled due date and the maternity leave I never got to take. Plus, I never felt like I really had the chance to enjoy the leadup to Christmas the way most people did or the way I wanted to. I came to REALLY resent it whenever November 1st rolled around, and when I started blogging, I wrote an annual post every November titled/themed/tagged "I hate November," lol. It was generally the same whine, year after year (and this post continues that "tradition," lol...!), but it felt good to vent.

Then I lost my job in 2014 and subsequently retired -- happily, in the summertime, before work on the annual report started that year, lol. I have to admit, the "I hate November" posts have trailed off since then. Leaving the stresses of work behind me has been a huge part of it, I'm sure. But the passage of time generally has also played a role, as has doing my "grief work" with the help of online and real-life friends & support groups. As the years have passed, the raw grief over my unfulfilled due date and childless Christmases has ebbed somewhat, as I've had more time to mourn and also to enjoy the other fun & beautiful things the Christmas/holiday season has to offer.

I don't know how you all feel about November -- I am sure there are other months that have the same kind of personal resonance for you. But I wanted to take some time today to acknowledge that, whether you were ever expecting a baby that was due in November, or any other time of the year, the next few months can be difficult for those of us who have lost babies -- and especially for those of us who don't have any living children to focus on during a very child and family-centric holiday season. Be kind to yourselves!  ❤