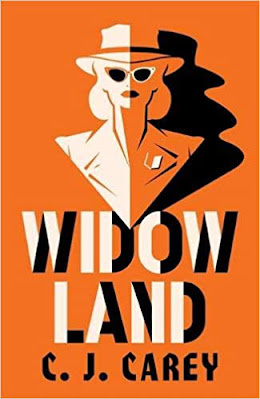 Earlier this summer, my Gateway Women/NoMo book club announced several upcoming selections. November's was "Widowland" by C.J. Carey (who also writes as Jane Thynne). I immediately started looking for it -- only to discover it was nowhere to be found in Canada, in any format. :(  Eventually, I was able to order a hardback/paper copy via Amazon.com (U.S.), which was shipped from Britain and landed in my mailbox right at the beginning of November. (I have since learned that e-pub versions will be available in Canada through Kobo, and paperback/Kindle versions in the U.S.... in August 2022!!)
I'm glad I went for the hardcover/paper version now. :)  (For one thing, that fabulous cover!!) I was intrigued by the premise of this book as soon as I learned about it. I've always enjoyed alternative history/dystopian fiction, particularly with a "what if the Nazis won the Second World War?" angle -- I still find myself thinking about Robert Harris's "Fatherland," some 30 years after I first read it.
"Widowland" is kind of like "Fatherland" crossed with Margaret Atwood's "The Handmaid's Tale." In this telling, Britain capitulated to/formed an "alliance" with Germany in 1940 and has been operating under a Nazi "Protectorate." Most able-bodied men have been rounded up and sent to labour camps, and the women have been classified according to age, heritage, reproductive status and physical characteristics, which determines where they live, the rations they receive, the clothes they wear, the kind of work they do, etc. At the top of the pecking order are the most pure and beautiful, the "Gelis" (named for Hitler's beloved niece). Also highly ranked: the "Klaras" -- fertile mothers of at least four children. The lowest of the low (just guess!!) are the "Friedas" -- childless widows/women over 50, who do menial labour, receive subsistence-level rations, and are relegated to live in the dilapitated, fenced-off slums of "Widowland."
It's April 1953, and the country is abuzz about the upcoming coronation -- not of Queen Elizabeth II (who, as Princess Elizabeth in 1940, disappeared, along with her parents and sister, shortly after the German takeover), but of King Edward VIII and his American divorcee wife, Wallis Simpson. Not only that, but the Leader himself (i.e., Hitler) is coming to Britain for the first time for the occasion.
Rosalind "Rose" Ransom is a "Geli," who works at the Ministry of Culture, editing classic works by the likes of "degenerate" authors such as Jane Austen and Charlotte Bronte to make their heroines more submissive and acceptable to the new regime. After hours, she's the reluctant mistress of her SS boss (who is married, with a wife and children back in Germany). She's 29 years old, and the clock is ticking before her lack of a husband and children will make her subject to reclassification.
One morning, she is summoned to the commissioner's office: subversive graffiti, in the form of quotations from now mostly forgotten female authors ("Strengthen the female mind by enlarging it and there will be an end to blind obedience" -- Mary Wollstonecraft;  “Lock up your libraries if you like; but there is no gate, no lock, no bolt that you can set upon the freedom of my mind.” -- Virginia Woolf), painted in large bright red letters, has been popping on public buildings around the country. The prime suspects are the inhabitants of Widowland:  they remember "the Time Before," they know the literature -- and they have little to fear, because they have so little to lose. Rose is  tasked with interviewing some of the residents of Widowland to identify suspects before the Leader arrives for the Coronation. What she learns from these women changes her life -- and, possibly, the course of history.
As I said, I was intrigued by the premise of this book, and once I started reading it, I gobbled up the 400 pages (of well spaced, large type) in a little more than two days. (It would likely have been less, but I wasn't feeling well and went to bed early on two nights.) It's derivative -- there have been other "what if Hitler won the war" novels & films -- but this dystopian premise, combined with feminism, childlessness and the subversive power of literature is a potent mixture and highly thought provoking. It's well written and entertaining. All the action takes place in under three weeks' time, leading up to the Coronation, and each chapter is dated, adding an increasing sense of urgency and tension that leads to the final climactic pages.
I debated on whether to give this 4 or 5 stars on Goodreads. I settled on 4.5, rounded up to 5, because I really enjoyed it and it kept me turning the pages. My one (small) issue with the book, I think, is that Widowland itself actually plays a rather small role in the book (albeit a critical one) -- despite the title, this is really Rose's story. I would have loved to have seen more of it and of the lives of the Friedas.
Our discussion for this book will be taking place in late November/early December -- at an ungodly hour in North America (5 a.m.!), lol.  But I'm tempted to set my alarm, because I'm itching to hear what others had to say about it!
This was Book #53 read to date in 2021 (and Book #2 finished in November), bringing me to 147% of my 2021 Goodreads Reading Challenge goal of 36 books. (I've exceeded my best-ever showing in the Goodreads Challenge since I joined in 2016 -- which was 50 books read in all of 2019.)  I am (for the moment, anyway...!) 23 (!) books ahead of schedule. :)  You can find reviews of all my books read to date in 2021 tagged as "2021 books."
*** *** ***
A couple of passages that I bookmarked:

'I've always wondered why the Leader hasn't come here before,' [Rose] said. 'I mean, it's been thirteen years since the Alliance was formed and he's never visited England.'
'He's like that,' said Martin shortly. 'He was enchanted by Paris before we took it. He possessed a giant scale model of the city and he would spend hours discussing it with his architect, Speer. What he would do with the place. What he would build. Then the country was taken and you know how many times he visited?'
Rose shook her head.
'Once. Just once. In 1940. And he stayed just sixteen hours. Long enough to visit the opera house and the Eiffel Tower. He said he'd seen everything he needed. It was all inside his head.'

'The Party hates writing for the same reason they hate reading. Because it involves being alone, in contact with an unfettered human imagination. That's why they fear it.'
'I don't quite understand why I do it.'
'Why does anyone write? Because all our lives are heading for the night. By writing we preserve our brief snatch of life. Like placing a star in the darkness of the past.'

'...I haven't spoken to [my father] properly since that last telephone call in 1940. He urged me to come to New York as soon as I could. I thought he was overreacting. There was no way the Alliance would last. As it happened, plenty in the regime agreed with me.'
He gave a dry laugh.
'The fact is the authorities couldn't believe how smoothly it went here. They expected a long, hard-fought resistance, and instead they found the population was mostly placid. People liked the idea of a strong leader -- they didn't much care what the leader stood for. What citizens wanted above all things was a quiet life. They didn't mind shrinking their horizons. They didn't object to not travelling, as long as nobody else was travelling either. They wanted an orderly life, with everyone knowing their place. Plenty of rules, the more of them the better. So that's what they got. The British didn't feel like collaborators, they felt like victims. And that's always much more comfortable.'