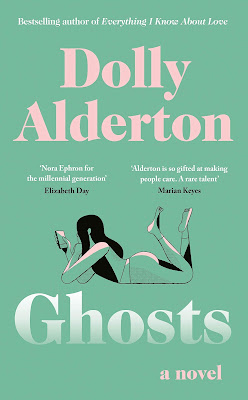 My first read of 2022 was "Ghosts," the first novel by British journalist & podcaster Dolly Alderton, the December choice of the Gateway Women/NoMo book club. We'll be discussing this book in a Zoom chat on Saturday. :)

Nina Dean is 32 years old and recovering from the demise of a longtime relationship. She's become a successful food writer and purchased her own flat in London -- but all around her, her friends are getting married, starting families and moving to the suburbs. With the help of her quirky/kooky friend Lola, she enters the strange new world of online dating... and hits the jackpot on her very first match (or so she thinks). Max is gorgeous, attentive and immediately tells her he's going to marry her on their first date.

And then -- after a few glorious months together -- he disappears from her life.

On the surface, this could be classified as "chick lit" or "romcom" -- it has many of the usual elements -- but there's an edginess to the writing -- elements of serious social commentary, along with the comedy -- that sets it apart from the usual light-hearted chick-lit/romcom fare. Single childless woman will no doubt relate to Nina's sharp-eyed observations about single life, loneliness, relationships and friendships. In Chapter 15, she delivers a rant to her childhood best friend Katherine (now married with children) that will ring true for many childless women. (It did for me!) She also delivers a diatribe to Lola's ex-boyfriend in Chapter 19 that I think many women would love to deliver to the commitment-phobic men-children in their lives, too.

I was particularly fascinated/horrified by Chapter 11, in which Nina & Lola attend a bizarre girls' weekend known as a "hen do." I think the closest equivalent here in North America would be a bachelorette party? -- I got married in the days before "bachelorettes" became a "thing" (versus more staid/traditional bridal showers -- I had two small ones) -- thank goodness?! -- and I've never been to one, so I'm not entirely sure if that's an apt comparison. In some ways, it was hilarious, but I also felt like I was in some kind of weird nightmare while reading it too. ;)

I enjoyed Nina's relationship with her pre-Max ex, Joe, as well as her relationship with her father, who has dementia/Alzheimer's. Like Nina, I found her mother irritating (especially at first) -- but ultimately found myself identifying with her. (After all, I'm closer to her age than to Nina's. Gulp.)  I liked that the ending was happy/upbeat -- albeit perhaps not the one you might expect. Although -- (mild spoiler alert, perhaps) -- as soon as I read a certain line in the opening Prologue, I knew what was ultimately going to happen in the book (with one plotline, anyway). I was right. ;)

A couple of passages that I bookmarked, because I loved the writing: