"The Story Girl" by L.M. Montgomery 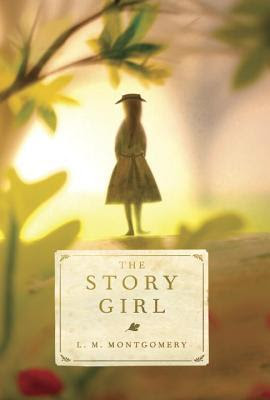 My L.M. Montgomery Readathon group on Facebook decided to take a break from the Emily trilogy (we've read two of the three books to date) and dive into a slightly sunnier book to brighten up the dreary winter months: "The Story Girl," published early in Montgomery's career, in 1911 (three years after "Anne of Green Gables").  The popular 1990s television series "Road to Avonlea" was based on this book, as well as its 1913 sequel, "The Golden Road," plus some of Montgomery's short stories (although the filmed version departed from the books in some significant ways).

"The Story Girl" is set in the fictional community of Carlisle, Prince Edward Island, home to generations of the King family. Brothers Beverley & Felix King arrive from Toronto to spend the summer at their father's boyhood home with their aunts, uncles and cousins, when their father is called to work in Rio de Janiero. The undisputed leader of the pack of King cousins and their friends is 14-year-old Sara Stanley, known to all as "The Story Girl" for her ability to captivate an audience with her stories. We get to hear/read some of Sara's stories, as well as follow the children on their adventures and watch them grow and change during a glorious, long-ago PEI summer.

As one of the administrators of our group (an LMM scholar) wrote, "If Anne of Green Gables is about an orphan’s search for home, then The Story Girl is a celebration of home, family traditions, and family stories."

It's been many years since I last read this book (probably back when the "Avonlea" series began?), but the memories came flooding back as I turned the pages.

"The Story Girl" was written in 1911, and set in a much different, more innocent time than our own. The children and their adventures, and the Story Girl's stories are the focus of the book:  adults are present, but mostly peripheral to the plot. On the less positive side, there are a few things/stereotypes that give the modern reader pause -- for example, prejudice against French people (e.g., an aunt passes along apples to the French hired men that the family finds unpalatable -- they won't eat them either!), classism (Felicity disdains Peter because he's a poor fatherless hired boy who works for her uncle), body shaming (lots of comments from various characters -- especially Felicity -- about Felix's weight) -- and (of course!) a "crazy" childless cat-loving spinster neighbour (Peg Bowen), who's rumoured to be a witch. :p  Overall, though, for me, the positives far outweighed the questionable parts. Who wouldn't love to spend the summer in an orchard on P.E.I., surrounded by loving family and steeped in tradition,  with plenty of cousins like the King children to run around and play with? (One group member has already observed that the orchard is a character in the book unto itself. It is!)

4 stars on Goodreads.  I will count this book as a re-read once our group finishes going through the book (in late April). We just began our discussion the past Monday, so there's still time to join us!