"Run Towards the Danger" by Sarah Polley 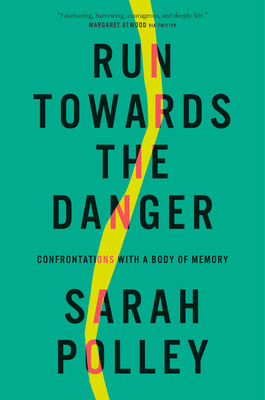 Sarah Polley, now in her early 40s, was one of Canada's best-known child actors back in the 1980s and 1990s -- most notably as Sara Stanley, the Story Girl, in the TV series "Road to Avonlea," an adaptation of several of Lucy Maud Montgomery's novels & short stories. As an adult, in addition to acting, she's written and/or directed some highly acclaimed (some Oscar-nominated) movies, television and documentaries, including "Away From Her." a beautiful adaptation of an Alice Munro story about an aging (childless!) couple (played by Julie Christie and Canadian national treasure Gordon Pinsent);  "Alias Grace," a six-part mini-series adapted by Polley from the Margaret Atwood novel, and "Stories We Tell," a documentary in which she delved into some of her family's stories and secrets, including the matter of who was her biological father.  She's also a political activist.

Now she's written a book, "Run Towards the Danger: Confrontations With a Body of Memory." It's not a comprehensive memoir, but a collection of six personal essays, including the one that gives the book its title.  In October 2015, Polley suffered a debilitating concussion when a fire extinguisher fell on her head as she rummaged through the lost and found bin at a local community centre. Three and half years later, still feeling the after-effects, she consulted an American concussion specialist in Pittsburgh:

He says, "If you remember only thing from this meeting, remember this: run towards the danger."

I should now view my symptoms, he says, not as something to be avoided, but as "opportunities" to increase my threshold of tolerance. I must learn to run into the discomfort instead of away from it.

Polley has adopted "run towards the danger" as her motto, and uses the essays in this book to confront and reflect on some of the more traumatic experiences from her past. "These are stories that have haunted and directed me, unwittingly, down circuitous paths. As these stories found echoes in my adult life, and then went another, better way than they did in childhood, they became lighter and easier to carry," she writes in the preface.

Curiously, the essay I'd heard about the least in the press and reviews surrounding the launch of this book was #3, "High Risk," in which Polley describes her high-risk first pregnancy and its aftermath, interspersed with memories of her own mother (an actress and casting director, who died at age 53 of colon cancer when Polley was just 11).  Polley's reproductive history included painful periods, ovarian cysts, stage 4 endometriosis, miscarriage and infertility (albeit she did go on to have three daughters). Her first pregnancy included gestational diabetes, placenta previa, an ambulance trip to the hospital, a stay on the high-risk ward until her C-section delivery, and a premature baby who spent time in the NICU. (Her subsequent pregnancies were less eventful.)

Some readers may find this chapter traumatic reading. Some might find it validating.  All I can say is, proceed with caution.

For me, it was both. It was also a delightful surprise to find Polley singing the praises of her obstetrician -- who also happened to be MY very own beloved Dr. Ob-gyn, who saw me through my doomed pregnancy in 1998, ran my preliminary fertility tests, referred me to Dr. RE, and remained my gynecologist for 20 years afterwards, until his retirement a few years ago. (She affectionately describes him as "a legend" -- rightfully so!)

These essays are honest (sometimes brutally so), thoughtful, introspective and self-aware, sometimes poignant, sometimes funny, sometimes infuriating. (Anyone with any thoughts of ever letting their kids go into show business at an early age needs to read this book.)  The writing is stellar.

An enthusiastic 5 stars on Goodreads.