"Arrow Through the Heart" by Matthew Hild 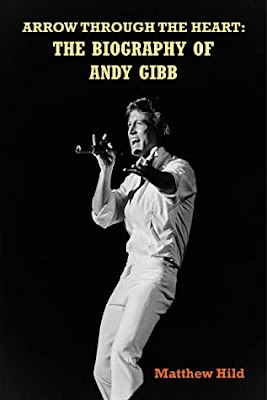 When I was in high school in the late 1970s, there was no bigger band in the world than the Bee Gees. In 1977, we learned that the three Brothers Gibb had another, younger brother, Andy, who was releasing his own album. (There's also an older sister, Lesley, who prefers to stay out of the limelight.)
Andy was just 19, only a few years older than me; he was gorgeous, and like his famous older brothers, he could sing. I bought (and still have -- among the very few albums I did not hand over to Older Nephew -- even though I have nothing to play them on these days, lol) Andy's first two albums, and listened to them over & over again. Lately, we've been listening a lot to the Stingray Seventies channel, and I've loved hearing some of those songs again for the first time in years.

One of my best friends was crazy about Andy, and bought concert tickets when he opened for Neil Sedaka (!) in Winnipeg in the fall of 1977. Earlier in the day, she called around to the major downtown hotels, putting on an English accent: "I'm trying to reach Mr. Andy Gibb, is he staying there, please?" Clerk after clerk politely checked for her and told her no, there was no one by that name registered there. When she got a curt "NO!" followed by the slam of the phone receiver, she knew he was at the Holiday Inn, lol. She & her friend hightailed it over there as soon as Andy finished his set (sorry, Neil Sedaka!). Lo and behold, they almost literally bumped into him, strolling past the pool, and he briefly chatted with them and posed for photos. I will swear that she gave me copies, but when I went looking for them in my old albums, I could not find them. I did, however, find photos from that concert that another friend in the city sent me. (See below!)

In March 1988, I was sitting in a shuttle van that carried mail and passengers back and forth between my company's headquarters in downtown Toronto and our operations centre in the northeast part of the city, en route to a meeting there. The driver had the radio on -- and that's how I heard that Andy was dead. He had just turned 30 years old. :(  I think I was aware that he had a problem with drugs, but to say I was stunned is an understatement, and I struggled to hold back tears as the station played one of Andy's songs (I think it was "I Just Want to Be Your Everything").  He actually died of myocarditis, an inflammation of the heart, but his heart had been weakened by years of cocaine abuse.

So young, so gorgeous, so talented. What a waste. :(

Although he was one of the biggest stars of the day, there's never been a book about Andy Gibb -- until now.  I don't remember where I first heard about "Arrow Through the Heart: The Biography of Andy Gibb" by Matthew Hild, but I eagerly downloaded a copy to my e-reader shortly after it became available a few weeks ago. (The title of the book is also the title of the last song Andy ever recorded.)  None of the Gibb family spoke with Hild for this book (Maurice died in 2003 and his twin brother Robin in 2012;  Barry Gibb is the only surviving Bee Gee), but he drew on a wealth of existing family interviews, and also talked to many of Andy's friends and band members.

Andy shared his famous brothers' good looks and considerable talent (many felt that he had the best voice of all the brothers) and they did a lot to help launch and promote his career -- but he was emotionally fragile, highly insecure and full of self-doubt. He was also haunted by a brief teenaged marriage and bitter divorce just as his career was taking off, and only saw his only child (a daughter named Peta) once, when she was 2.  His was a case of too much, too fast, too soon, and sadly, he quickly succumbed to the lure of drugs, cocaine in particular, as well as alcohol. He was also devastated by a tempestuous, well-publicized romance and break-up with actress Victoria Principal (then famous as Pam Ewing on "Dallas").  He started missing out on recording sessions, scheduled TV appearances and cancelling performances of the musicals he appeared in. By the early 1980s, his once-skyrocketing career had crashed, and never fully recovered. He declared bankruptcy in 1987, a few months before his death.

This is a detailed and well-researched portrait of Andy, his life and career, and does a competent job of telling his story. In some ways, the book suffers from the unavoidable fact that the story it tells is a very sad one:  we know right from the start that it doesn't end well, and it's painful to watch someone so young and gifted self-destruct so spectacularly, knowing what ultimately happens. (On a pickier, editorial note, my e-book edition suffers from a lot of typos.)

On the plus side, the author does a good job of highlighting Andy's career achievements and personal appeal. Despite his flaws and obvious problems, it's clear that he was well loved by his fans, his family and the people who knew him, and the book helps us understand why, and why he is still so fondly remembered. (The epilogue makes the striking point that by 2020, he had been dead longer than he had been alive. He would be just 64 years old today.) For me, it brought back a lot of good memories from my youth -- of Andy, the Bee Gees, and other celebrities of the day, including the Bay City Rollers (they did several concerts together), the Osmonds (he & Marie were briefly a "thing") and fellow Aussie Olivia Newton-John, who (sadly) died as I was reading.

I was curious about what happened to Andy's daughter, Peta. Hild relates in the book's poignant epilogue that she and her mother (Kim Reeder) flew from Australia to England after Andy's death and then attended his funeral in Los Angeles.

I did some Googling and found a 2017 article where she spoke about her famous father for the first time. She's now 44, a high school teacher, singer and mother of two children, living in Australia. In recent years, her Gibb cousins reached out to her and together, as the Gibb Collective, they recorded a tribute album of classic Gibb songs, honouring their fathers.

...that two hour phone conversation with [Maurice's daughter] Sam made Peta realise that there was someone out there who had shared exactly the same experiences, and made her feel part of her dad’s family, and it gave her a feeling that she wasn’t alone in all of this.

“My father is an integral part of the Gibb musical legacy. I came to the conclusion that if anyone was going to represent him, it should naturally be me”.

...Joining The Gibb Collective began as a way to face her past and connect with her dad, but for Peta she has gained something so much more.

“I’ve found such a connection with my cousins. The long overdue family reunion to come out of this project is something I never expected. I’m finally able to connect with that side of my life in a positive way, on my terms and in a way that makes me feel proud.”