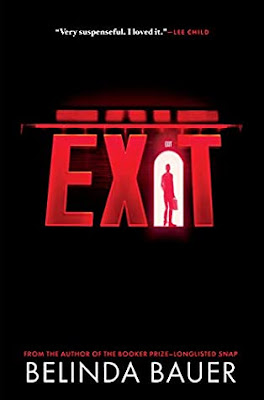 "Exit" by Belinda Bauer is the August pick for my Gateway/Lighthouse Women book club. (One of the group's facilitators picked this one, in part because she lives near Bideford, the real-life town in Devon where much of the action takes place!) We'll be discussing the book in a Zoom meeting later this month. I had never heard of Belinda Bauer, whose previous novel, "Snap," was longlisted for the prestigious Booker prize -- but I will definitely be looking for more from her!

Our hero, Felix Pink is a 75-year-old mild-mannered English gentleman, who has lost both his son and wife to cancer, and now dotes on his little dog, Mabel. His sad losses have led Felix to volunteer with the Exiteers, a group that helps terminally ill people exit this world on their own terms. All Felix and his fellow Exiteers have to do (working in pairs) is to keep the dying person company (without actually assisting them in any way), act as witnesses, collect the paperwork and remove the evidence, so as not to cast suspicion on the person's family members.

But at one such "exit," something goes terribly wrong...

I had zero expectations going into this book.  A novel in which assisted suicide plays a prominent role might not sound like (or be) everyone's cup of tea, but I wound up hugely enjoying it, and sped through it in a little more than one day (and with my wonky eye, too!). There were a few echoes of "The Thursday Murder Club" by Richard Osman (which I read and loved -- reviewed here) -- an elderly protagonist trying to untangle a mystery that he finds himself at the centre of, some slightly befuddled police officers (one of whom is dealing with his own problems), and a lot of humour -- albeit I found it somewhat darker, quirkier and more offbeat than Osman's books.

It wasn't quite as captivating as the "Thursday Murder Club" books for me -- but I still enjoyed it immensely, and it did pick up at the end, with a finish that left a smile on my face. I debated between a 4 & 5, and (because I was in a generous mood, lol), I settled on 4.5, rounded up to 5.