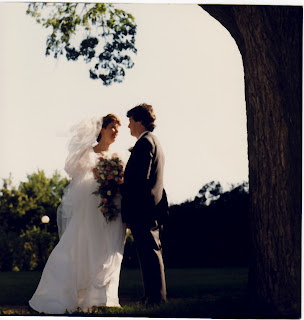 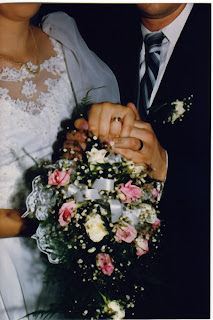 It was a blazing hot, sunny day, 23 years ago. Almost four years after we'd met, 3.5 years together in spirit (though often thousands of miles apart at school), July 6, 1985, was the day my dh & I finally got married and began our life together.

Appropriately, the entire wedding took place on the campus of the university where we first met in the fall of 1981. My family had moved every 3-6 years during my lifetime & my parents had recently moved to a new town where we knew few people & hotel/motel rooms were scarce. We did approach the minister of the Anglican congregation where my mother attended but he was lukewarm on marrying us since dh & I weren't members of his parish & not likely to be.

So we moved to Plan B, which was to approach the chaplain at the Anglican college on the campus where we had met, in a city about an hour from where my parents now lived, with a Ramada Inn close by that was willing to offer us a group discount. "I'd be happy to marry you," the chaplain, a lovely, British-born woman said without hesitation. At one of our meetings, she asked us whether she should include the part in the blessing asking to be blessed with the gift of children, and the grace to bring them up to know & love the Lord. We looked at each other & smiled and said yes.

The reception was held in one of the multipurpose rooms in the student union building on campus, with floor to ceiling windows that opened in the evening onto a patio filled with shrubbery. It was almost like having an outdoor wedding. We took our photos in front of the beautiful, pillared administration building (built in 1912). The sun was hot & bright (we're squinting in many of the photos), but there was, thankfully, a breeze, as you can see in the top photo. I have the train of my dress gathered up over my arm, with my veil flapping in the breeze, so it's not a perfect shot, but I love that photo. Somehow, it reminds me of the scene in "Gone With the Wind" just before the intermission, with Scarlett standing beneath a tree & silhouetted against the sunset sky, vowing she'll never be hungry again.

We had 120 guests, all but four of them from my side. The four were dh's dad, brother & two cousins, who all flew in from Toronto to make up the male half of the wedding party. My bridesmaids wore short dresses in "dusty pink," which was all the rage back in 1985, and we carried pink & white roses in our bouquets. We dined on chicken cordon bleu and fresh local strawberries for dessert.

We spent the night in the city's swankiest downtown hotel, drove out to my parents' the next day to open gifts & spend more time with family who had come a long way to celebrate with us and, the next morning, flew to Calgary for a week-long honeymoon that took us to Banff & Jasper (as well as the infamous Stampede!). I remember dh was exhausted from all the driving and slept for 12 hours while I watched the end of the Live Aid concert in our Calgary hotel room.

Our first dance was to "You & I" by Crystal Gayle & Eddie Rabbitt, with a refrain that seems strangely prophetic, given the way things have turned out: "We'll be allright... just you & I."

It's 23 years later. For better or for worse it IS just you & I, and yes, the kids are allright. Happy anniversary, sweetie. xoxo
(For more of this week's Show & Tell from other bloggers, visit here.)
Posted by loribeth at 12:00 PM