Earlier this week, I mused out loud in the blogosphere about who will inherit my stuff; specifically the stuff I inherited from my grandparents, and how I'd like to be able to pass these things on to someone else in the family -- presumably my cousins' kids -- for whom they might have meaning. So for today's Show & Tell, I thought I'd share some photos of a few of those things. 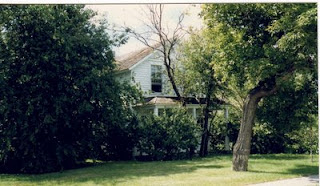 My grandparents lived in the house that my grandmother's parents built shortly after their marriage in the very early 1900s (pictured above). It was an old, old house with issues, even when I was a kid, but I loved it and spent a good chunk of all my childhood summers as well as other holidays there.

After my grandfather had a heart attack in July 1983 (while I was away at grad school), it became apparent that they needed to move. They eventually found an apartment in a fourplex in town. The old house was now empty of people, but (since the apartment was much smaller than the house) not of things. For several years after they moved, we would still go over to the old house in the summertime to sit on the screened-in back porch, overgrown with Virginia creeper. We even camped out there several times until things got just a little too rickety. There was no electricity but, for a time, we could turn on the water. Dh found it a little spooky, but I always slept just fine while I was there. ; )

The family decided that it was not worth paying the taxes on the house, so after several years of non-payment, we knew the town/county would soon be taking over. So in the summer of 1996, a final clearout of all the stuff that was left in the house began. Family members converged to help out & claim the things they wanted; whatever was leftover went up for auction.

Being 2,000 miles away, I missed out on most of this, although I did spend several days of my vacation at the very end, helping to clean up the last few things & load them up for the auction sale. My sister got Grandma's buffet & old treadle sewing machine; my cousin got the old kitchen table. The cost & logistics of shipping meant that most of the stuff I got tended to be on the smaller side. But that was OK with me, since it was those thing that probably meant the most to me anyway.

There was a similar scenario after my grandparents went into the seniors' home: we kept the apartment (with my parents subsidizing the costs -- for one thing, it gave us all a place to stay when we visited, motel rooms being at a premium in this small town, a good hour's drive from the nearest large centre). After my grandparents passed away -- Grandpa in October 1998 and Grandma in October 1999 -- there was a similar divvying up & cleaning out process.

The kitchen was always the heart of Grandma's home, small as it was. There was always a pot of coffee percolating on the stove, and always friends & relatives dropping by to share it and some good conversation. I remember the kitchen being full of people, good food, and laughter. I love that my own kitchen is filled with things from hers. People will sometimes tell me how "homey" my kitchen feels & I think Grandma deserves a lot of the credit for it.

Here are a few of those things: 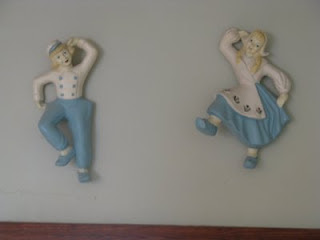 Grandma was Swedish, but she had a lifelong fascination with Holland and Dutch things. She had several pictures of windmills around the house, & these ceramic figures of a little Dutch boy & girl hung on the dining room wall in the old house. She wrote on the back of them that they were a gift from my grandfather, bought at the drugstore in the Canadian border town where I was born, & the date. They're high up on the wall, so I didn't take them down to check, but I believe they're from the late 1940s or early 1950s. 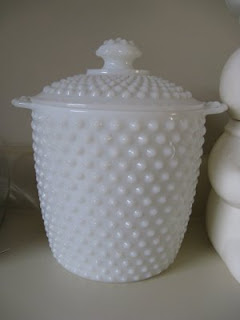 Grandma had specific thoughts about who should have certain items from the house. She always said that my one cousin should have the chest of drawers from one of the bedrooms, & that I was to have the cookie jar. Why, I have no idea (although I will admit to eating my fair share of its contents, lol). It moved to the apartment when Grandma & Grandpa did. She tried to give it to me a few times, but I always said it belonged in her kitchen & I would gladly take it "when the time came."

After her funeral, my mother told me that I might as well take it now, so I wrapped it carefully up in several thick towels & took it with me in my carryon bag on the airplane. I believe it's made of what's called "milk glass" -- "dotted Swiss" or "hobnail" style. I have seen other cookie jars like it in Martha Stewart magazine, etc., so I know that it's a collectible & would probably fetch a nice price, were I to sell it on eBay or whatever -- but I would far rather give it to the next generation of cookie-eaters in the family. I know Grandma would like that. ; ) 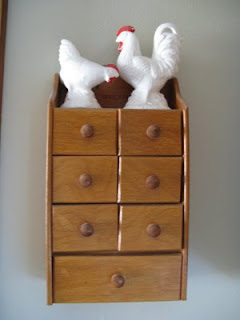 This spice box, & the salt & pepper shakers on top of it, were on the kitchen wall at the old house. When I was little, I loved peeking inside the drawers (which generally housed a ragtag collection of coins, stamps, etc.). My mother brought the spice box for me on one of her visits, saying she thought I should have it. To say I was tickled is an understatement, "but where are the salt & pepper shakers??" I asked. To me, the three items went together like, well, salt & pepper! I got those on my next visit home, & felt a sense of completion when I was finally able to return the shakers to their proper place atop the spice box. 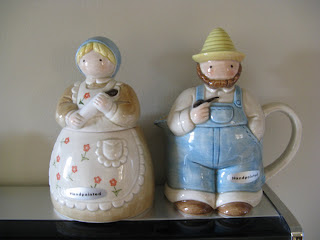 I actually gave my grandparents this cream & sugar set for Christmas one year when I was in university, & Mom felt I should have it. I bought it because it just said "Grandma's kitchen" to me. They now sit on top of my stove. 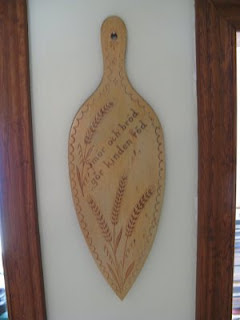 This breadboard was a fixture on the wall of Grandma's kitchen for as long as I could remember. My mother & her boyfriend at the time bought it for Grandma during a visit to the Minnesota State Fair in September 1958, & since she gave it to Grandma, she deemed that I should have it. The translation of the Swedish inscription, according to Grandma, is "Bread & butter make your cheeks red." 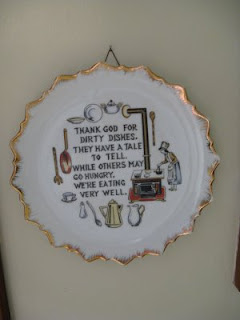 This little plate hung over the kitchen sink in the old house. It was headed for auction before I scooped it up on my last visit to the old house. My great-aunt (my great-uncle's wife) gave it to my grandmother.

I have other things from Grandma's house, but these are the most visible items from my kitchen!