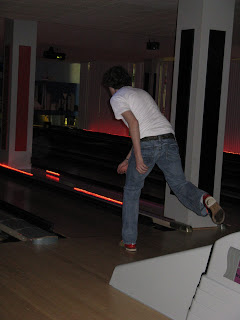 I've been tagged by Ya Chun, Serenity's mom.

Rules are: open your sixth picture folder in your computer. Post the sixth picture and give a bit of background about it. Tag 4 people -- I'm picking a few of my favourite bloggers whom I've seen posting photos before ; ) -- Julia S., Busted, Wordgirl and Miss E.

I haven't published many, if any, identifiable photos of people in this blog yet, & I like that this is an appropriately anonymous photo. ; ) This is our oldest nephew (19 at the time), at a first birthday party for one of dh's cousin's kids last March (2008), held at an ancient, vintage 1960s, glow-in-the-dark bowling alley in the basement of a strip plaza. We almost didn't make it, as it was held the day after a gigantic early March snowstorm hit the city -- but we woke up to clear, sunny skies & the sound of snowplows -- although the snow was piled up so high, it was hard to find the entrance to the plaza where the bowling alley was located. I blogged about this cousin & his wife, and mentioned the birthday party, here.

I had to chuckle when I read the line saying, "I tried to keep busy taking photos whenever the mommy talk got a little too stifling." I have a reputation as "the family photographer." Partly because I love taking photos, but yes, it does give me something to do besides sit silently while the other women talk about their kids. When I think about it, the image of my camera as a protective shield comes to mind.

The party was a bittersweet event for us -- as most babies' first birthday parties are -- but especially so because, next to us, the baby's parents were the longest-married childless couple in dh's family. They had been married 11 years before this little girl finally made her appearance (with the help, it is rumoured, of IVF). Her mom was the one person I knew I could chat with about something other than diaper rash and report cards (although the "I" word never once crossed our lips). And now she'd abandoned me -- gone over to the other side. And had another baby, a boy, last September, when she was almost 45. I imagine there will be a birthday party this September, maybe even in the same place, & we'll be going to that one too.

Our oldest nephew is the second-oldest cousin of his generation. He was born when dh & I, & his parents, had been married for about three years. Dh & I were still living in a tiny apartment & struggling financially -- we knew children of our own were still a ways off, but we relished being an aunt & uncle, & loved to spend time with (and spoil) our nephew, and his younger brother, when he arrived four years later. By then, we had moved to the suburbs in one direction, and they had moved to the other side of the city -- but when our first nephew was born, we all lived in the city, and saw much more of each other than we have in more recent years.

The years have flown by so fast -- it's hard to believe sometimes. He will be starting community college this fall (he's been working since he graduated high school a few years back).