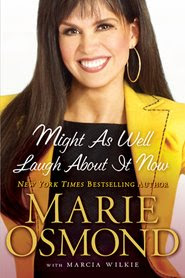 I was an Osmonds fan.

Still am, actually. (Yes, I admit it.) Yes, I know. The teeth. The hair. The squeaky-cleanness. The imitation Elvis jumpsuits. The barbershop harmonies. The corny skits on the Donny & Marie Show. The Andy Williams Show, for crying out loud.

But when you're a 12-year-old girl living a sheltered small-town life in the 1970s (pre-Internet, pre-cellphones -- even pre-Pong, for Pete's sake...), that can all be mighty appealing -- the very idea of a guy who doesn't drink, doesn't smoke, and won't push you to do things you might not be ready for. The Osmonds were Mormons. I didn't know much about the Mormon faith then -- Mormons being a pretty rare species in my part of the world back then -- but I did know (from that font of knowledge, Tiger Beat Magazine) that they married not just "till death do us part," but for "time & eternity" -- and that sounded wildly romantic to my teenaged self.

Previously, a big David Cassidy poster had graced the door of my bedroom. (It was starting to wear a little on his lips, where I kissed him every night before I went to bed.) One early 1970s summer, however, however, my best friends from across the street saw the Osmonds on "American Bandstand" (which they taped on their audio cassette tape recorder -- which is what we did if we wanted to preserve a TV memory in those pre-VCR days), bought the "Osmonds Live" album & before long, my sister & I were hooked too. (Donny sang Elton John's "Your Song" on that album. I don't think I had heard of Elton John at that point -- remember, I was only 11 or 12 years old! -- but I fell in love with that song. It's still one of my favourites, and was a close runner-up for our first dance song at our wedding. Still do. So if anything, I owe the Osmonds for introducing me to Elton John!)

Anyway, by the time I was in high school, the posters eventually came down & my musical tastes diversified to Elton John, the Eagles, Linda Ronstadt and Fleetwood Mac (eventually)(I'll tell you about my last big teen idol fling -- the Bay City Rollers -- some other time...!!). But I still got a kick out of seeing the Osmonds on TV now & then. And still do, perhaps even more so, as the years have passed. They're a fond reminder of the more innocent days of my growing up years.

Of course, that was (gulp) well over 35 years ago. They're all older and greyer now -- but hey, so am I. ; ) They have had their share of personal problems and pain. They ran into financial problems in the 1980s and spent years paying off debts. Alan has MS. Wayne had a brain tumour (that was successfully operated on). Marie has been divorced (twice). Donny admitted to suffering from social anxiety in his memoir, Life is Just What You Make It, and is now a grandfather (!!!). Both of their parents have passed away.

But I still think they are an immensely talented family. And they can still make me cry, albeit for different reasons than when I was a lovesick teenager. I watched their family reunion show on "Oprah" & their 50th anniversary special on PBS last winter, Kleenex box at my side.

Back in the mid-1990s, I finally got to meet Donny, after standing in line my entire lunch hour (& then some) at the Toronto Eaton Centre, when he made a promotional appearance for "Joseph & the Amazing Technicolor Dreamcoat" (when it played in Toronto the second time around). (My girlfriend & I later went to see the show & had a blast.) It was worth the wait. He was around 40 by then, I think -- he looked older (but hey, so did I!) -- but still damned good. : )

Anyway -- I didn't want to blog about the Osmonds for simple nostalgia's sake. I recently picked up Marie's new book, Might As Well Laugh About It Now. I had read her previous book, Behind the Smile, which described her struggles with post-partum depression, including a much-publicized incident in which she left her children with the babysitter and disappeared for a long drive up the California coast. (She later learned that her mother had done almost exactly the same thing, some 40 years earlier!) Marie now has eight children. Four of them are biological, four are adopted, and if you ask her which are which, she'll tell you she doesn't remember.

This book came about when she was asked to write a full autobiography. She decided she wasn't ready to do that but, in thinking back over the rich experiences of her life, she realized she had gained a lot of insight over the years that she could share. The book is a "Chicken Soup for the Soul" style collection of vignettes from Marie's personal and professional life -- some of them funny, some of them poignant -- and each chapter has a life lesson at its core for the reader.

The last chapter of the book, "You'll Be There," is the one that left me going, "Wow, I had no idea." I had dh read it & he had to admit it was pretty touching too. It describes the birth -- and death -- of Marie's niece, Jennifer -- her (non-performing) brother Tom's fifth child -- in 1981. Marie writes of how her mother and brother called her from the hospital, telling her the baby was not expected to live very long, and asking her to come support her brother.

Initially, Marie didn't think she could. She feared that she would "fall apart." "I couldn't face my brother's pain, knowing that there would be nothing I could do to fix it," she says.

But then she had a brief vision -- the image of a small, dark-haired girl, hugging her, greeting her at what appears to be the entrance to Heaven, saying, "You'll be there, won't you?

And so she went to the hospital. And comforted her brother. And held her tiny niece before she died.

There is more to the story -- involving the death of Marie's mother a few years ago, the appearance of two monarch butterflies at her funeral (monarch butterflies, of course, hold a great deal of significance for dh & me and the members of our support group), and a Mother's Day shopping trip that leads to a special purchase (not to mention an ice cream sundae).

But I'll let you read it for yourself.
Posted by loribeth at 8:24 PM