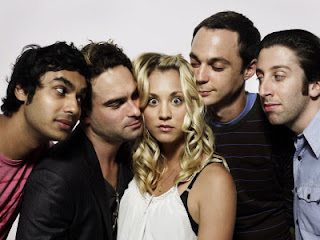 I don't watch a lot of TV these days. It's a combination of (a) mindless TV watching being replaced by mindless Internet time ; ) (b) shows appear & then disappear so quickly these days, you barely have time to get attached to a show & it's cancelled, (c) when I do find a show I like (& it lasts more than a few episodes), the networks shuffle the time slots around so much it's hard to remember what night & time it's on, or (d) show three repeats for every new episode (whatever happened to showing all the repeats in the summer??) & (e) dh controls the clicker, lol.

Also, to be frank, a lot of what's on TV today just doesn't interest me. I have absolutely no interest in reality TV. It took an article in this week's Entertainment Weekly to explain to me who the Kourtney, Khloe & Kim I keep seeing on the covers of People & Us magazines are (but I'm still not sure why I'm supposed to care). I used to watch "Jon & Kate Plus 8" until the marriage started degenerating & it just got too painful to watch. Slice of life shows like that are slightly more palatable to me than contrived competitions. I did get hooked on "Battle of the Blades" on CBC last season, & I've occasionally tuned in to "American/Canadian Idol," but at least there's some genuine talent involved there (as opposed to the ridiculous competitions, schemes & backstabbing that takes place on shows like "Survivor," "The Bachelor" & "Big Brother").

I still enjoy a good, well-written comedy, though, & Monday nights for the last few years have been "must see TV" for me & dh. I've gotten hooked on "How I Met Your Mother" (love Neil Patrick Harris). As a smalltown Prairie girl, I absolutely loved "Corner Gas" on CTV while it was on (& miss it horribly)(side note: I lived in the same town as Brent Butt for three years in the 1960s, when I was a little girl & he was either a baby or not born yet). Still watch "Two & a Half Men," although it hasn't been quite as good as it used to be lately (& I can't believe some of the stuff they get away with on network TV).

Our new favourite, though, is "The Big Bang Theory." To be frank, dh & I were both geeks back in younger days (probably still are, lol). Dh was actually a science geek at school (& still is -- he actually understands a lot of the references & "in jokes" on the show). So we've become big fans of this show, about four geeks (three physicists & an engineer who work at a university in California), their improbable friendship with the gorgeous blonde wannabe actress/waitress who lives across the hall. It's well written, well characterized & well acted -- we were both ecstatic that Jim Parsons won the Emmy at the awards last week. There is absolutely no one on TV like Sheldon Cooper!

Anyone else love "Big Bang?" What are your favorite shows?
Posted by loribeth at 6:58 PM