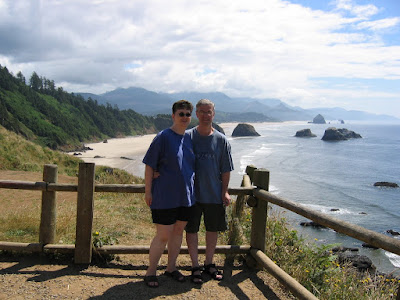 When I thought about a "happy" photo to publish, I immediately thought about Cannon Beach, Oregon. : ) This photo was taken at Ecola State Park, near Cannon Beach, on our last trip there, in August 2005. (Way too long ago, if you ask me...!) You can see the famous Haystack Rock off in the distance. It's not the greatest photo of me & dh, but you can see the grins on our faces. : )

We've been to Cannon Beach three times with extended family members -- in 1993, 2001 and 2005. The 2001 trip came shortly after our last failed IUI cycle. I had started having anxiety attacks shortly after my BFN -- I knew it was the last cycle we had agreed to do, and I didn't think I could face moving on to IVF (with its even larger doses of meds & even greater stresses) -- but the thought of a childless future was equally difficult to face. I was a wreck.

We went to talk to an infertility counsellor (whom we had consulted earlier in our journey), & she urged us to take the summer off from all things ttc related before making a final decision on our future. We told her about our vacation plans, & she thought it was a great idea. It was. We took long walks on the beach & basked in the healing warmth & laughter of our extended family. By the end of the summer, much as we had wanted children, we knew we couldn't go back to treatment. We were done.

There are lots of places in the world (even just in North America, or Canada) that I want to go & see -- but going back to Cannon Beach, soon, is high on the list. It's definitely one of my "happy places."
Posted by loribeth at 7:30 AM