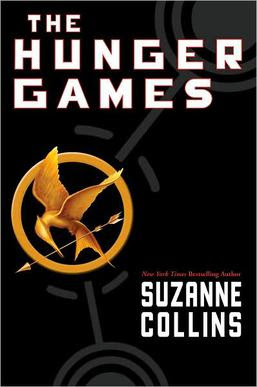 Over the last few years, my reader friends (both online & "in real life") have been raving about three series of novels:  the "Twilight" Saga, the"Fifty Shades of Grey" books and "The Hunger Games" trilogy.

A few of my friends adored "Fifty Shades" -- but several others (including my sister) warned me that the writing was atrocious and the books were basically Harlequin romances dressed up with leather & chains. As for "Twilight," the vampire thing has never appealed to me. SIL tried to get me to read Anne Rice, more than 20 years ago. Just couldn't get into it.

On the other hand, I do enjoy a bit of dystopian fiction/alternative history now & then. One such book that springs to mind is "Fatherland" by Robert Harris, which I read some years ago. It's set in early 1960s Germany, but the twist here is that Hitler won World War II, Joseph Kennedy (father of the real-life President Kennedy, who was opposed to the war) is now President of the United States, the Jews have disappeared from Europe and the Holocaust has been covered up. (Or almost.) There's even a moptop quartet from England that makes a cameo appearance in Hamburg. ; )

Another is "The Handmaid's Tale" by Margaret Atwood, which we covered in an earlier version of Mel's book club. (I actually noticed a number of parallels between that book and this one as I read.)

So I figured I might actually like "The Hunger Games" if I ever got around to reading it, and the GRAB(ook) Club offered the perfect excuse to put it next on my list. ; )

"The Hunger Games," if you haven't heard by now, is set in a future United States, now a totalitarian nation known as Panem, divided into 13 districts. Our heroine & narrator, Katniss Everdeen (one thing I did NOT particularly like in the book were the characters' rather ridiculous names), lives in the poorest area, District 12, once known as Appalachia. Each year, the children aged 12-18 in each district gather for "The Reaping," in which one boy & one girl are chosen by lottery as "tributes," then whisked away to the Capitol, where they will fight to the death in the annual Hunger Games until just one warrior is left standing.  The Hunger Games serve as a sort of sick form of reality entertainment for the wealthy citizens of the Capitol, and also as a reminder to the rest of the country about the power the Capitol holds over them. And when Katniss's younger sister Primrose in chosen in the Reaping, Katniss volunteers to fight in her place.

This was a good book, and a quick read (I put it on my e-reader and read it on the commuter train to & from work last week).  I wouldn't say it's the best book I've ever read, as my nephew (age 20) did. Perhaps the whole idea of children being forced to kill each other is just a little too barbaric for my tastes. It's certainly nothing like the books I would have read as a young adult, but I can see how it would appeal to a generation raised on violent video games (not to mention episodes of "Survivor").

But I did enjoy it -- enough that I was tearing up in the last 15 pages, and enough to download the other two books in the series, and to think about seeing the movie. (I like Jennifer Lawrence;  I thought she was brilliant and deserved the Oscar in "Silver Linings Playbook.") ;)

It made me think.


I've mentioned that the book reminded me of Margaret Atwood's The Handmaid's Tale, Survivor and other reality TV shows, and violent video games.  What if anything about the book reminded you most of our life in the here & now, and why?


After you answer my question, please click over to read the rest of the book club questions for The Hunger Games.  You can get your own copy of The Hunger Games by Suzanne Collins at bookstores including Amazon.
Posted by loribeth at 7:00 AM